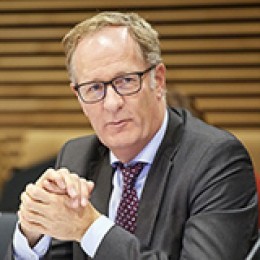 The seminar is unfortunately canceled

What does the European Union do for social fairness and what are the priorities for the next years? The European Union Delegation to Norway and Fafo Eastforum invite you to a seminar with Joost Korte, Director-General for Employment, Social Affairs and Inclusion at the European Commission.

Joost Korte has long experience from the European Commission, having been Deputy Director-General successively for Trade, Agriculture, and Enlargement, before taking up responsibility for the Directorate-General for Employment, Social Affairs and Inclusion in 2018.

These are some of the questions that we will discuss at the seminar. Joost Korte will give introductory remarks. The rest of the seminar will be organised as a dialogue between the audience and the speaker.

Dialogue between the audience and the speaker

After the seminar, around 14:30, we want to invite the participants to a drink and light snack at Fafo.

The European Union Delegation to Norway

The Delegation maintains regular contacts with Norwegian authorities and with all important players in Norwegian society. It prepares analyses and reports on developments in Norway. Another important task of the Delegation is to provide information about European Union institutions and policies to both the government and the wider public.

Fafo Eastforum is a network consisting of companies, representatives from the social partners and the authorities. The activities – mainly website and seminars – are based on research and knowledge about the consequences of labour immigration to Norway. Our work is commissioned by altogether 25 participants.

Light lunch (sandwiches, fruit and coffee/tea) is served from 12:00. The seminar starts 12:30. After the seminar, around 14:30, we want to invite the participants to a drink and light snack at Fafo.

The event is free of charge and open to the public. Limited seating.

Fafo is situated in Borggata 2B by the Police House and behind Grønland church. 10 minutes from Oslo Central Station, 5 minutes from Grønland or Tøyen subway stations, Bus no. 37 stops outside. Please note that Borggata 2b is reached by car via Grønlandsleiret. Google map