Local and regional trade union representatives in The Norwegian Food and Allied Workers Union (NNN) have been asked about the function of their organization. This report, based on qualitative interviews, includes themes as recruitment, trade union activity, education and the local trade union representatives' need for assistance. The local organisation is divided in three levels: local branches (workplace), divisions (one or several branches in a geographically area) and county divisions (assisting branches and local divisions in each county).

Declining trade union density is a common challenge for the trade union movement as a whole. For NNN, it is problematic to gain a foothold in “new” industries, such as sushi, ready-made food and microbreweries, while the situation is quite different in larger corporations. In the fish processing industry, it is quite difficult to recruit new members among the labour immigrants (mostly from Easter European countries). In other words, there is a considerable variation in size, resources and trade union density in the various parts of the organisation.

Recruitment of new members is regarded as very important, but when it comes down to reality, the local shop stewards have neither time nor resources to do the job. This leads to a well-known vicious circle: in companies with few members, union representatives often have time-shortage. When recruitment is not prioritized, the local union is not able to grow in terms of more members.

Recruitment of new members and visits to local branches/workplaces are important tasks for the local divisions. In many of NNN's divisions, however, these tasks appear to be less structured and goal-oriented.
Usually local trade union representatives and the management in the company have the daily contact in matters concerning the production and the conditions for the employees. Ordinary trade union members are seldom involved, unless there are major issues on the agenda. It is pointed out that the employees need to be engaged on a more regular basis. However, it is difficult to bring them to meetings or activities outside working hours. At the same time, it is reported that there is less room for trade union activities during working hours now than a few years back.

Among the local divisions, the activity level is very variable: some divisions have a very high activity, while others are virtually broken. This is often connected to single person’s engagement. At the same time, many local branch-representatives say that they do not know which tasks the division have, and that they rarely or never are in touch with them. Large geographical distances often lead to lower activity (such as visits to the workplaces, participation in board meetings, etc.).

The shop stewards (branches) underline the importance of having a good and factual relationship with the local management. Together with knowledge and expertise, this is the prerequisite for running a local branch. Many consider the NNN's selection of courses as very good. At the same time, it is challenging for the representatives in the smallest branches to have time and opportunity to prioritize education. There is a clear desire for more decentralized and / or online-based courses.

The local union representatives have very different ways of applying for assistance. Almost all of those who were interviewed and who had contacted the main
NNN-office experienced this contact as good and useful. Trade union representatives working in companies in larger corporate groups, usually seek help from the group employee representatives. The use of the aid and support from the county representatives is very variable, and there is uncertainty about their role and expertise. The county coordinators also found that their task as a link between local and main office was not fully exploited.

Local union representatives also have a "wish list", where they want more exchange of experience/knowledge between local branches, a kind of “buddy system”. In addition, it is asked for closer follow-up of local branches, better care for the members, closer contact with apprentices and a specially designed membership for hired and temporary workers. 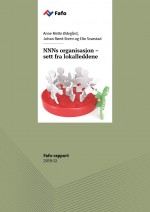