Much of our research includes people that fall outside of the traditional peacekeeping and peacebuilding literature, such as:

– informal and service workers operating in the peacekeeping economy

Thus, while focusing on key issues and themes in peacekeeping, peacebuilding, and stabilization environments – such as the political economy of peacekeeping; the interaction between locals and internationals in peacekeeping/ building sites; disarmament, demobilization and reintegration; corruption and conflict minerals; sexual exploitation and abuse committed by peacekeepers; and gender – we retain an emphasis on those that are both marginalized and often considered analytically marginal.

In so doing, we hope to provide channels for other voices and experiences to be heard, while bringing new insights to bear on peacekeeping and peacebuilding research. 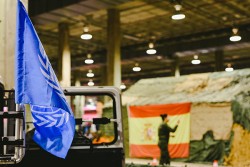 Protecting whom?
Approaches to sexual exploitation and abuse in UN peacekeeping operations
Fafo-report 2008:36

Seeing DDR from Below
Challenges and dilemmas raised by the experiences of ex-combatants in Liberia
Fafo-report 2008:03

Palestinian Opinions on Peace and Conflict, Internal Affairs and Parliament Elections 2006
Results from Fafo polls in September and November-December 2005
Fafo-paper 2006:09

Policy or Process?
The Politics of International Peace Implementation
Fafo-report 456

Economies of Conflict
The Next Generation of Policy Responses. Report of the expert consultation on conflict economies and development. Oslo, 4 November 2003
Fafo-report 436

Security, Development and Economies of Conflict: Problems and Responses
Fafo-paper 2003:17

Gendering Human Security
From Marginalisation to the Integration of Women in Peace-Building. Recommendations for policy and practice from the NUPI-Fafo Forum on Gender Relations in Post-Conflict Transitions
Fafo-report 352

Swords for Ploughshares
Report of the Forum on the policies and practices of small arms and light weapons disarmament in post-conflict transitions. Peace Implementation Network, Programme for International Co-operation, Conflict Resolution
Fafo-report 332

Blue Helmet Havens: Peacekeeping as Bypassing in Liberia and the Democratic Republic of the Congo International Peacekeeping

Transactions and Interactions: Everyday Life in the Peacekeeping Economy Journal of Intervention and Statebuilding
http://www.tandfonline.com/toc/risb20/current

Life in a ‘Peace-kept’ City: Encounters with the Peacekeeping Economy Journal of Intervention and Statebuilding
http://www.tandfonline.com/toc/risb20/current

Service, sex, and security: Gendered peacekeeping economies in Liberia and the Democratic Republic of the Congo Security Dialogue
External link

The political economy of DDR in Liberia: a gendered critique Conflict, Security and Development
External link

‘Getting in, getting out’: militia membership and prospects for re-integration in post-war Liberia Journal of Modern African Studies
External link

The Struggle to Satisfy: DDR Through the Eyes of Ex-Combatants in Liberia International Peacekeeping
External link

Insecurity and Development: The rhetoric of the ‘failed’ state European Journal for Development Research
External link

Rebellion and warlordism: the spectre of neopatrimonialism

War in the Great Lakes Region and Ugandan Conflict Zones: Micro-regionalisms and Meta-narratives

Securitizing the Economy of Reintegration in Liberia

Gender and Post-Conflict Statebuilding: A Synthesis
2009