Evaluation of the pilot flexitime agreement in the state sector

This report evaluates the changes to the special flexitime agreement in the state sector that came into force on 1 January 2018. The changes entailed an extension of the start and finish times, i.e. the earliest time that employees could start work and how late they could work within ordinary working hours. These changes, which were implemented as a pilot scheme, were not intended to increase the working time, the intention was only to change when the work could be carried out. The report examines the impact of the changes through surveys of employees, union representatives and managers in the state sector (autumn 2019), employee timesheet data from the Norwegian Government Agency for Financial Management (DFØ) and qualitative interviews in state enterprises (autumn 2019 and January 2020).

In Chapter 2, we examine the impact that the extended start and finish times have had on how employees work. In total, 60 per cent have made use of one or both of the new working hour parameters (06:00 to 07:00 and 20:00 to 21:00) since the change was introduced.

Those who make use of the new working hour parameters tend to do so less than weekly but on a number of occasions in a month or less often. The new start time in the morning is more frequently made use of than the new finish time in the evening. Of those who took advantage of the opportunity to work early in the morning, 29 per cent reported doing so daily or weekly. In the evening no one reported making use of the later finish time daily, but 12 per cent responded that they did so on a weekly basis.

Even before the new hours were agreed, quite a few employees were working outside the agreed working hours, i.e. they were working between 06:00 and 07:00 or between 20:00 and 21:00, despite this being a breach of the flexitime agreement in place at the time. Relatively few reported that this happened daily or weekly, while half reported that it happened on a number of occasions in the course of a month or six-month period. A large proportion is currently working within the new parameters, which indicates that the extended start and finish times have led to some change in when employees work. In parallel with this, we also find that half of the employees have continued to work beyond the finish time since the new parameters were introduced. The frequency varies, but most do so on a number of occasions in a month or less often.

The reasons for making use of the new flexitime parameters are complex. Adapting to periods with large workloads is the most common reason, particularly for evening work. In addition, employees make use of the increased flexibility to fit around childcare needs, travel distance and commuting options. Taking advantage of the extended hours to accrue extra hours that can be taken as a whole day’s leave is also quite common.

Almost one in four surveyed employees reported having less than 11 hours of rest between shifts because they had taken advantage of both the new start and finish times at some point. However, given that there are few agreements in place on deviations from the rest period rules, this is most likely being done in breach of the rules, requiring at least 11 hours of rest.

The survey indicates that there is some disagreement between managers and union representatives about the boundaries between when to use flexitime and when to use overtime. However, only a few indicate that this often leads to disagreements. Overall, the results show that the extended start and finish times have not, in the main, put employees under greater pressure to use flexitime rather than imposed overtime. Nevertheless, there are some employees, union representatives and managers who believe that the extended hours have brought such pressure.

In Chapter 3, we examine whether the employees take the extra hours they have accrued as leave. The survey showed that the vast majority of employees had taken flexi days in 2018. We have also shown that it is reasonably common to take a number of flexi days during the course of a year. Thirty-six per cent of employees reported taking ten or more flexi days in 2018 and 62 per cent took five days or more.

The change to the flexitime agreement also included a rule aimed at improving the process for approving when to take accrued hours. Under the pilot scheme, the meeting to plan how accrued hours could be taken - which previously had to be held within a reasonable timeframe prior to the end of the accrual period - had to be held at least four months before the end of the accrual period. The survey showed that only a small minority (8 per cent) of the employees had experienced such planning. Most of the employees who had accrued hours in the last accrual period were of the opinion that the new agreement had not led to any changes in the planning for taking accrued hours. Thus, the four-month rule does not appear to be practised to any great extent. There is also little indication in our survey that the process for approving when to take accrued hours is particularly complicated or contentious.

In Chapter 3, we also looked at the number of employees with excess accrued hours (more than 50 accrued hours on the settlement date) and a deficit of hours worked (more than 10 hours below the required minimum on the settlement date), based on data from DFØ. We did this for about 37 800 flexitime employees who register their hours using SAP HR software (management system used in many state enterprises). Managers covered by the flexitime scheme are included in the data. The data material includes many of the enterprises in the state sector, but large agencies such as the Norwegian Labour and Welfare Administration, the Norwegian Armed Forces, the Norwegian Public Roads Administration, the Tax Administration, the Norwegian Correctional Service, etc. use other systems and are therefore not included in the data material. This also applies to several of the large universities. However, a number of universities and university colleges are included in our data.

In Chapter 4, we discuss the consequences of the pilot scheme. The change in the flexitime agreement had received little attention in the enterprises where qualitative interviews were held. According to the survey, neither does the change appear to be particularly controversial among employees. Most people are happy with the extended start and finish times and would like these to remain in the future. The change has led to somewhat greater flexibility, but does not appear to have resulted in major changes in when and how much the state sector employees work. Neither do we see any sign that the extended flexi hours have been used to accrue overtime to a greater extent than before.

A significant proportion of employees have had shorter rest periods between two shifts than required by the statutory minimum. However, the challenge of getting enough rest between two shifts only increased for a small minority during the pilot scheme. This

A significant proportion have also had accrued hours deleted at the end of the accrual period. This means that many have benefitted from the opportunity to transfer an increased number of hours to the next period, since they will now have five hours less deleted than would have been the case in the old system.

The process to facilitate the planning of when to take the accrued hours was supposed to be improved as a result of the pilot scheme. This part of the pilot scheme does not seem to have been very successful. Few managers hold meetings in the timeframe stipulated in the agreement, but this does not appear to be particularly problematic. Nevertheless, there appears to be potential for improving these processes with the aim of reducing the number of hours that are deleted at the end of the settlement periods.

On the whole, managers, union representatives and employees are satisfied with the current pilot scheme. The flexitime agreement provides a flexibility that seems to benefit both the employer and the employee. This may in part be contingent on the managers appearing to respect the intention of the agreement and not pressurising employees into making use of the new extended hours. However, there is no interest among employees, union representatives or managers for extending the scope of the agreement any further. 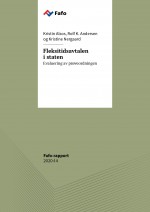