This project is a collaboration between Handel og Kontor Norge, Virke, Fafo, Fellestiltakene LO-Virke and the Centre for Senior Policy (SSP), funded by Fellestiltakene LO-Virke and SSP. The project aims to examine the conditions for older workers in the retail trade, with a focus on describing the situation both through statistics and a qualitative exploration. The main objective is to contribute to better senior policy in Norway and to shed light on the situation in a sector that has received little attention so far: retail shops. The project addresses this main objective through the following: 1. studying the situation for seniors in the retail sector through the registry data and a survey, and 2. examining local practice through case studies in some businesses.

Retail trade, on which this project concentrates particularly, is part of Standard Industrial Classification group G, Wholesale and retail trade, repair of motor vehicles and motorcycles, and includes the automobile industry, wholesale and retail. Shops can be found throughout the country, and they employ locally. The proportion of younger workers (under 25 years) is much higher in the sector in general, and in the retail trade in particular, compared with other industries. This may indicate that working in a shop can be combined with school and university studies, but that many of the young people do not remain in the industry for the long term. In November 2015, 14 per cent of wage earners in Norway worked in the retail sector. The industry employed over 330,000 people. Of these, 78,000 were 50 years or older, i.e. about every fourth employee in the retail sector was a senior (defined as 50+). The proportion of seniors was lowest in the retail trade and highest within wholesale. A clear majority of the seniors in the retail trade were working full time. In 2000, almost 70 percent of seniors worked full time, and the percentage rose to 77 percent in 2015. It would seem that those working full time were mainly those that make working in retail trade their professional career, while the youngsters who used it as a source of income in younger years to a significantly greater degree worked part time.

To get behind the numbers, we also conducted interviews in a selection of stores with employees who were seniors. In particular, we were keen to find shops where being experienced was an advantage, since this would favour the seniors. This might be shops such as gentlemen’s clothing, pharmacies, hardware stores, grocery stores selling fresh fish or meat. We spoke with employees who were seniors as well as managers in the stores, and asked about the working conditions for older workers in the stores. Of course answers from a small number of cases are not representative for the industry as a whole, but overall they have given us an interesting glimpse into a workplace where seniors are valued for their experience and expertise. The managers put great emphasis on the value of experience-based competence in meeting customer demands.

When it comes to systematic senior policy work, we found a distinction between large versus small and medium size stores (SMBs). The large stores had systems for human resources management (HRM), also age-friendly HRM, and human resources departments to advise and assist when needed. The SMBs we visited told of good practice but little formalized HRM. Where managers and employees were few and worked side-by-side in their everyday work, both managers and seniors saw little need for formal meetings or systematic dialogues. 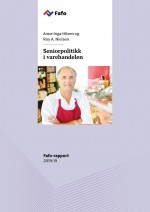