The approval scheme for foreign craft and journeyman’s certificates. Effects on labour conditions

The approval scheme for foreign craft and vocational training was established following an initiative taken by the social partners during the wage bargaining round for the front-runner industries in 2014. The scheme came into force in 2016, and NOKUT was charged with the operational responsibility. Until then, many labour migrants had most likely been working as unskilled workers in Norwegian workplaces.

After four years of experience with this scheme, this report focuses on its preliminary effects, both for the individual employee who is applying for approval and for the enterprises that have experience with employees who have applied and received a decision. In other words, our objective is not to examine the approval process as such, but to look at the effects that the scheme has produced for those who have applied for approval, as well as for the employers. The research questions in the report consist of the following:

·     What consequences does an approval of vocational skills have on the wage level and working conditions of individual employees? What are the effects of a rejection of the application on the individuals concerned?

·     To what extent does the scheme contribute to integration and inclusion in the labour market?

·     What are the experiences of the employers with regard to the approval scheme?

·     How do various actors in the labour market assess the legitimacy of the approval scheme and its contribution to more legitimate practices?

We also elucidate questions regarding the scheme’s effects on more overarching goals, such as its contribution to more legitimate practices and efforts to combat labour market crime in vulnerable industries.

The research questions are complex, and we have used a variety of data sources and methods to elucidate these issues. We have conducted an online survey among applicants to the approval scheme. A questionnaire was distributed to a total of 1326 persons, with translations to Polish, Lithuanian and German. We have also conducted qualitative interviews with enterprises that have employees who have applied for approval. In addition, we have interviewed key informants in central employers’ associations and trade unions, as well as a publicly owned construction enterprise, about their experiences and viewpoints regarding the scheme and their assessments of its various effects.

Although many respondents report to be earning higher wages after gaining approval, it nevertheless seems that generally the scheme has had a limited effect on the wage level of the applicants. For example, we can see from the survey that the wage level is the same for those whose application was approved as for those who were rejected. In some parts of the labour market, especially in the manufacturing industry, those whose application was rejected will not receive the wage supplement for certified vocational skills.

We do not find strong correlations between approval of the application and other labour conditions. There are no significant differences between those whose application was approved and those who were rejected when it comes to important aspects such as non-payment of wages or fake employment contracts. Among those who were approved, there are some who report that the approval has had a positive effect on conditions other than wages, such as feeling more secure in their employment relationship or having more responsibility. They also expect to become more attractive in the Norwegian labour market. The demand for migrant workers with approved craft skills is especially high in the segment of the labour market that is engaged in public tenders for construction projects. Here, the NOKUT approval scheme plays a major role in documenting the proportion of skilled craftspeople in public projects, which simplifies the contractor’s task of monitoring compliance with the requirements on each construction site.

With a limited number of applicants and approvals, these account for a very small proportion of the labour migrants who work in Norway. For example, the total number of approvals account for no more than 0.5 per cent of all resident labour migrants. Although not all labour migrants have vocational training from their home countries, this shows that the proportion of approvals is limited when seen in relation to the volume of labour immigration. With such a small number of both applicants and approvals, it will be difficult for the scheme to contribute significantly to the efforts to combat social dumping, labour market crime, unregistered work and other challenges that it was intended to help rectify. On the other hand, for those individual employees who emerge from the application process with an approval, the scheme may be significant. They are highly likely to be more attractive in the Norwegian labour market. The demand for migrant workers with approved craft skills is especially high in the segment of the labour market that is engaged in public tenders for construction projects. 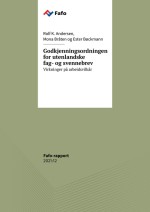