Europeans use 'social models' to refer to the combination of welfare state, industrial relations, and educational institutions jointly structuring what we can think of as the supply-side of the labor market. The dominant view in controversy over the social models has been that in the name of equity they have impaired the labor market's efficiency, thereby causing unemployment. But doubt is cast on this supply-side-only diagnosis by powerful macroeconomic developments, from the Europe-wide recession following Germany's post-unification boom to the deepest economic crisis since the interwar Great Depression, which the Eurozone's truncated economic governance structure transformed into a sovereign debt crisis, threatening the Euro's and even EU's very survival. This book explores the interaction of Europe's diverse social models with the major developments that shaped their macroeconomic environment over the quarter century since the fall of the Berlin Wall. It concludes that this environment rather than the social models are primarily responsible for the immense social costs of the crisis. 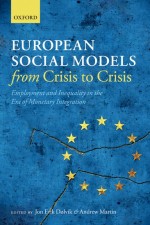