This report is an analysis of the overall findings from the research project on Haitian child domestic workers. The main objective of the research is to establish a better understanding of child domestic work phenomena in Haiti, as well as mapping the existing institutional responses. Findings in this report are based on statistical data from a nation-wide household survey carried out in September 2014. The report also draws on insights from a qualitative fieldwork carried out in Haiti in 2014, and an institutional study that included fieldwork in Haiti from May to September 2014. In addition, we have reviewed recent academic literature and policy-related works on child domestic workers in Haiti.
The research was initiated by UNICEF, the Haitian Ministère des Affaires Sociales et du Travail (MAST), the Institut du Bien-Etre Social et de Recherches (IBESR), ILO, IOM, the IRC and the Terre des Hommes Lausanne Foundation. It was carried out with the support of 28 Haitian organisations that have served in a reference group for the research project. 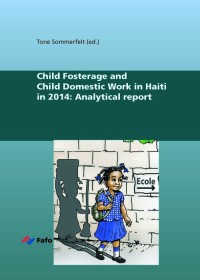