The economic dimensions of civil and armed conflict are significant sources of insecurity for both people and states. Market-based activities – both licit and illicit – have played a part in the loss of sovereign control over natural resources, the undermining of social and economic development, crippling levels of corruption and the outbreak or continuation of war. In response, governments, multilateral organisations, businesses, and civil society have launched a range of initiatives in sectors associated with economic activity in conflict zones, all with the aim of tackling a devastating and resilient problem. Economies of Conflict: The Next Generation of Policy Responses builds on the current policy debate to suggest some ways forward. The report is based on the discussion among international experts and Norwegian stakeholders in Oslo in November 2003, organised by Fafo AIS, in cooperation with the Foreign Ministry of Norway.

This report is the latest in a series of reports from the Economies of Conflict series of policy research from the New Security Programme (NSP) at Fafo AIS. The NSP conducts research into the social conditions – both global and local – of insecurity, conflict and war. 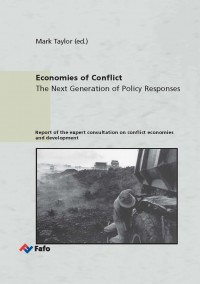