Web edition The environmental problems that have come to light in the Baltic countries after the dissolution of the Soviet empire have given rise to widespread anxiety. But they also offer opportunities for novel and more ambitious forms of regional cooperation.

‘Baltic-Nordic Rendezvous’, which includes articles from a range of scholars, experts and policy-planners, explores some of the avenues that are opening up in the Baltic-Nordic Region. The report pinpoints the need for a vigorous and comprehensive research-policy dialogue involving NGOs, not only in the countries in transition but also across the Baltic Sea. Environmental cooperation can become an important ingridient in the creation of a future Baltic-Nordic civil society.

Originally based on contributions from a conference held by Fafo in Oslo in 1994, the report has been prepared by a Norwegian-Danish board of editors: Jan Dietz and Aadne Aasland (Fafo, Norway), and Børge Klemmensen and Poul Kragh (the Department of Environment, Technology and Social Studies at Roskilde University, Denmark). ‘Baltic-Nordic Rendezvous’ is issued in the framework of the Common Security Forum, an independent international network of academics and politicians devoted to promoting the idea of common security. 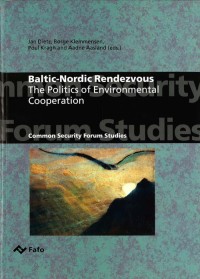