This report sets out to map and analyse Norwegian development policies relating to efforts to ensure girls’ rights and gender equality. The report asks how the specific concerns and rights of girls and young women figure in Norwegian development cooperation: How do Norwegian authorities’ efforts to ensure gender equality and girls’ rights, cohere with the aims defined in the UN Sustainable Development Goals in Agenda 2030? To what extent are the Norwegian government’s stated aims and commitments followed up in policies and overseas development aid priorities? The report describes the Government’s increased efforts within the education sector. It highlights that the focus on girls’ education and vocational training is not sufficiently integrated into the Government’s support to private sector development and job creation. In addition, the prevention of child labour and early marriage are stated as explicit goals of Norwegian development policies, but are neither embedded in the organisational structure of Norwegian development aid administration, nor given specific funding. Within the health area, reproductive health data tends to render invisible girls 10–14 years of age. Attention to the concerns of adolescents – including the age group 10 to 14 – should be intensified in efforts to promote family planning and sexuality education. 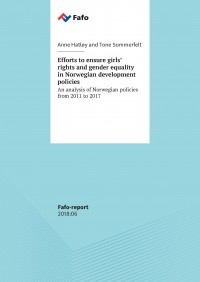