In Norway, immigrants meet a society with a particular blend of working life, family life and welfare state. They also face a normative expectation of female employment. The topic of this dissertation is how the welfare state and working life shape institutional spaces of opportunity and constraint, and thereby influence immigrants’ attitudes and practices in relation to family life and mothers’ employment. The topic speaks to major debates in the field of migration studies, like the relationship between immigrants’ economic and cultural adaptation, and the interplay between these adaptations and the institutional context in the host country. I also draw on theories from literature on the welfare state, work and family to inform my analysis of how institutional structures can influence immigrants’ family lives and women’s labour market participation. The thesis is based on a) a survey of 1821 persons from Iran, Iraq, Norway, Pakistan and Vietnam, b) qualitative interviews and focus groups with bureaucrats and users of the Norwegian Introductory Programme for recently arrived refugees and immigrants, and c) Norwegian register data held on women in paid work from Iran, Iraq, Norway, Pakistan, Somalia and Vietnam.

In Article 1, I show that a significant share of immigrants have a more gender-equal practice than that indicated by their attitudes. One way to interpret this dissonance is as a consequence of a rational adaptation to practises that may result in better living conditions. The lack of coherence between attitudes and practises may therefore be a result of the Norwegian context pushing families with gender-traditional attitudes towards a more gender-equal practice. However, a significant share of immigrants in my survey data have gender-traditional attitudes and practices that coincide. At first glance, this group appears to be more robust in its encounter with the Norwegian context. An alternative description is that they face – and adapt to – other aspects of the institutional structures. Norwegian family and gender-equality policy is closely linked to women’s labour market participation. Women outside the labour market, and families in need of government-funded income protection, encounter other schemes, which produce other spaces of opportunity, with other incentive structures.

A key ambition of Norwegian integration policy is that mothers should also participate in measures aimed at qualifying them for the labour market. However, the street-level bureaucrats’ implementation of this policy may diverge from national intentions. In the third article, the topic is still how the structures of the welfare state and working life can influence integration processes, but the emphasis here is on the interaction between immigrants and street-level bureaucrats in the welfare state’s front line. By analysing user involvement in situations where participants on activation programmes either do not express what they want, or have preferences that are not in line with the programme’s guidelines, we show how practices can vary between different types of street-level bureaucrats in the encounter with different types of users. The analysis illustrates Lipsky’s (1980) point that street-level bureaucrats do not act as mere policy implementers, but also help to shape policy content. One of the article’s contributions to research is also, in my view, how it illustrates the role that programme participants’ characteristics, attitudes and preferences can play in influencing policy implementation. In order to understand how the welfare state’s institutions form different types of spaces of opportunity for different groups of immigrants, the analysis should therefore cast a wider net than the formal institutions.

In the fourth article, I examine how exposure to the Norwegian context impacts on attitudes towards mothers’ employment. Are attitudes towards mothers’ employment influenced by how long you have been exposed to the Norwegian institutional context, or are attitudes more related to who you are and how you have managed in Norway? Immigrants with good Norwegian language skills and a satisfactory financial situation are among those who are most positive about mothers’ labour market participation. It can thus seem that immigrants with a strong foundation to succeed financially are also more likely to adapt culturally. Alternatively, this group of immigrants may have been more inclined to support mothers’ labour market participation even before immigration. I find no indication that attitudes towards mothers’ employment is related to years of residency in Norway. The relevance of exposure-time, or perhaps rather of growing up in Norway, are more clear for immigrant descendants. Pakistani descendants view mothers’ labour market participation in a far more positive light than Pakistani immigrants do. This fits into a pattern in which the descendants’ family practices and attitudes are more on a par with those who dominate the majority population. However, support for mothers’ labour market participation is lower among Pakistani descendants than among those without an immigrant background. Change is combined with continuity. 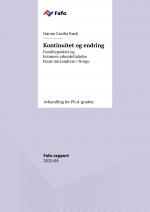