How are participation and co-determination practised in Norwegian workplaces, and how do different actors assess the benefits of and need for current arrangements? These key issues are raised in this study funded by the Norwegian Ministry of Labour and Social Affairs. The study covers various bodies, committees and arrangements laid down in statutory law and collective agreements; ranging from the right to employee representation in the employer’s governing bodies, to safety delegates, working environment committees, negotiation and agreement-based employee representation and co-determination arrangements, as well as direct participation in the performance of the work. We examined both direct (individual) and representative forms of participation and influence. The project has been structured into five interrelated modules.

In Module 1, a literature review was conducted, and key informants were interviewed. This allowed us to establish the knowledge status and identify the knowledge gaps. A summary of this work was published in the document ‘Workers’ right to co-determination and participation. Knowledge status’ (Trygstad et al. 2019). Findings in Module 1 were used to design interview guides and formulate questions in the survey (see ‘Methodology’, Chapter 2).

We used various methods to shed light on the questions in Modules 2 to 4. i) We conducted interviews with the chief executive or other key managers with personnel responsibilities, local trade union representatives and/or safety delegates in a total of 75 enterprises. ii) We conducted two surveys. In 2018, one survey received responses from 4400 workers. In 2019, the survey was repeated among a sample of managers, local trade union representatives and safety delegates. iii) We analysed relevant questions in Statistics Norway’s surveys of living conditions during the period 2006-2019. We found that analyses of these data gave us a sufficient basis for presenting the state of what we can broadly refer to as corporate democracy in Norway, and give us the necessary knowledge to comment on developments over time and highlight challenges. Events in 2020 changed this slightly. The COVID-19 pandemic has had major repercussions for Norwegian society, including in terms of employment and the economy, and certain industries have been severely affected. At the time of writing, it is not clear what consequences the pandemic will have on Norwegian working-life in the medium to long term, but the organisational level parties have faced new problems. Therefore, we have drawn up an additional ‘COVID-19 supplement’, where we examine respondents’ assessments of the social partnership in the spring, summer and autumn of 2020. We also look at how employee representatives assess different aspects of the social partnership during the same period. The key findings of this report are summarised below.

The level of activity in the social partnership is high in many organisations. In the municipal sector and in the state-owned health enterprises, our qualitative interviews show that both fixed and more ad-hoc committees and bodies have been established at different levels. We also have examples of organisations that have established arrangements, but where these are not actively used as an arena for cooperation between the organisation partners.

With regard to agreement-based arrangements, we find that around three out of ten local trade union representatives do not have formal information discussions and/or negotiation meetings with the manager at their level. A fairly large proportion also reported that they rarely or never have informal meetings with managers at their level on matters that concern members and/or the organisation.

Overall, 15 per cent of local trade union representatives report that they do not have formal meetings and rarely or never have formal meetings with the manager. We define this as a participation gap. This refers to a discrepancy between what should be practised according to statutes and agreements and what is actually practised.

Competence enhancement is a topic that both managers and employee representatives find missing the social partnership. This is particularly related to technological changes and the increasing digitisation in the workplace.

There are also issues that local partners define to be outside of the social partnership. This includes productivity targets, and decisions related to the use of tender and procurement processes. Lack of involvement in such processes can put a damper on opportunities for co-determination. Furthermore, our qualitative analyses show that local trade union representatives within groups of corporations and chains feel that they have less influence than others. Decisions are often made at levels in which they do not participate.

Many of the local trade union representatives, safety delegates and managers believe that the organisation’s management has become more bureaucratic in the last two to three years and has a more top-down approach than previously. Those who report this also consider the level of trust between the partners to be significantly lower. Furthermore, we find that frequent contact helps to strengthen the trust between the local partners. Our findings suggest that reduced formal and informal contact and a shift towards a more hierarchical leadership may weaken the respect and trust between the local partners.

We found that perceptions of the employee representatives’ and the safety delegates’ influence vary. The municipal sector is distinguished in several areas, both in terms of how the various arrangements are practised and their quality. The relationship between the partners and the quality of the social partnership appears to be good.

Individual participation and influence are given a strong focus in both the Working Environment Act and the basic agreements. Assessments of influence on employees’ own work situation and the work itself were largely unchanged in the period 2006 to 2019. Just over six out of ten reported that they have considerable freedom to decide how to perform their work, but that their opportunities for influencing important decisions that have a bearing on the work are somewhat fewer.

Public sector employees consider themselves to have less influence than private sector employees. This also applies to opportunities for determining workloads and the pace of work.

Our analyses show that the pace of work has increased, as have responsibilities and financial performance requirements, and deadlines have become tighter.

In assessing whether the current statutory and collective agreement framework is suitable for the work(ing) life of 2020, our findings indicate that how the rules are practised is the problem, rather than the rules themselves. The key informants in the study highlighted various developments that could have an impact on the social partnership:

A key finding in our study is that no dramatic changes were identified. There is currently widespread support for the Norwegian micromodel. Our findings suggest that both the type of organisation and characteristics of the worker, impact on the prevalence and quality of corporate democracy. 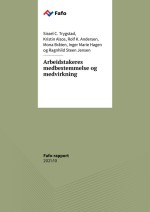