This report presents the main findings from a study among Ukrainian refugees and their support providers in Poland and Norway. We ask what factors shape refugees’ decisions to leave Ukraine, and for those already abroad, what shapes their decisions to remain or return.

See also our policy brief based on the report.

This report presents the main findings from a study of migration aspirations and migration decision-making among Ukrainian refugees in Poland and Norway, focusing on the following four research questions.

The analysis is based on qualitative interviews with refugees, policymakers and NGOs in Poland and Norway, conducted during the summer and autumn of 2022. The data is analysed in light of the wider literature on migration aspirations in refugee populations.

A decision to flee, return, or remain in a country of refuge is rarely easily made, and in this report, we have tried to describe the ambivalence that many refugees express when they talk of the future. For many, there are strong arguments for wanting to go back to Ukraine, but also strong arguments for moving on and starting a new life abroad. Some refugees would in the same interview talk convincingly about their homeland and all the things they missed and were not willing to give up, and in other parts talk about why they think they might not be going back – often tied to lack of jobs and poor economic prospects. With this report, we do not aim to classify refugees according to migration or return intentions, but rather point to the factors that induce them to express a desire to return, and the factors they emphasise when they talk of the desire to stay.

What are the mechanisms that shape migration flows out of Ukraine during the summer and autumn of 2022, and why did these refugees not leave earlier?

The respondents we have met in Poland and Norway who left Ukraine after June 2022, appear to have a somewhat different profile. Some come directly from areas close to the front line and tie their decision to leave now to a missile hitting a house in their neighbourhood, or even their home or workplace. Many link their decision to leave Ukraine to the lack of a job or other sources of income. Some had first stayed in Ukraine as internally displaced before they moved on. There are also some who leave now because they are exhausted, not from living in areas directly impacted by the war itself, but by constant alarms and fear of missile attacks. To a larger extent than in the first phase, the new arrivals appear to have a concrete plan of where to go and how to get there.

Will the large groups of refugees in Poland move on to other countries in Europe if the war does not end soon?

The Ukrainian refugees who stay in Poland are given some support to access the labour market, to secure a sustainable income, to have a place to live and to access education for children. This assistance is provided by a range of different actors. Most of these services are, however, not rights based, meaning that these are services some refugees can access, but they are not entitled to them. Although there are organisations assisting with housing, language training and economic support, refugees in need of such assistance are not always able to obtain it.

Our respondents in NGOs and representatives of local and central government report of little overall coordination of measures, few plans for the long-term integration of refugees, and substantial uncertainty with regards to long-term funding. While there is a strong sense of pessimism that this is not likely to improve, there are some who hope improvement can come through EU initiatives and/or international funding. The optimistic tone does in no way dominate in the interviews we have conducted.

There is a strong preference among many Ukrainian refugees for remaining in Poland. The near proximity to Ukraine makes it possible to go back and forth to visit relatives or check on properties and businesses. The large diaspora provides psychological and practical assistance and the cultural and linguistic proximity between the two countries means that language barriers are small and the refugees feel more at home. For women with husbands and sons in Ukraine, being in Poland means being physically close to them, and for persons dependent on salaries from Ukraine, the living expenses in Poland are lower than in Western Europe. However, the large number of refugees arriving at the same time in Poland has made it difficult for some refugees to get by there. Finding a place to live is increasingly difficult and refugees with an education struggle to find jobs where they can use their skills.

The refugees who struggle to find a source of income or a place to live in Poland either have to move on to other countries in Europe or return to Ukraine. At the time when we conducted our fieldwork, it seemed that many of those who struggled to get by in Poland choose to return rather than move on. They seemed to be unaware of the more extensive economic support systems for refugees in other countries of Europe. They worried that they would not get by in other European countries without a job and without speaking the languages. As more people get settled in Western Europe and they start sharing their stories on social media, this information might perhaps spread more rapidly. It is possible that this also will lead to more of the refugees moving on, rather than returning, if they are not able to make ends meet in Poland.

Why are some refugees returning to Ukraine now?

Some Ukrainian refugees are returning to a Ukraine still at war. Some return to areas in Western or Central areas of Ukraine that have been less directly affected by the war. They left in the early phase of the conflict when no place in Ukraine felt safe, and return now because they feel the immediate danger of invasion is over in these areas. Others are returning to areas more affected by the war. Many talked of this period as a defining moment – at which they had to decide if they wanted to return to their old life or start a new life as a refugee in Europe. Some feared that if they did not return now, they would lose their job, and would not have a job to return to if they wanted to return later. Others return to take care of dwellings and gardens that have been standing unprotected for months. Refugees from the areas around Kyiv that had been occupied by Russian forces in February/March talk of homes with windows and roofs broken from bullets and missiles that will not survive the winter if they do not go back to save them now. When we did our interviews in late July, some also returned because the new school year was approaching and they wanted their children to continue their education in Ukraine. Some of our respondents have higher education from Ukraine and returned because they felt the process of being able to work in their profession abroad was too demanding. Some of those returning also suggested that they only went back to Ukraine to see what life was like there now and were open to the idea of leaving again shortly if things did not work out. These respondents all said that they would move to a different country if they were to leave Ukraine again.

Several studies suggest that return ambitions tend to be stronger among refugees who remain in neighbouring countries to a conflict zone. In our data this also seems to be the case, that respondents who have moved as far as Norway were less likely to express return intentions compared with those who stay in Poland.

Do the refugees in Norway intend to return to Ukraine when the war is over?

Most of our respondents in Norway ended up in in this country by coincidence. They came to Norway because they had friends or relatives living here that they came to stay with, or because Norway was recommended to them by the volunteers they met when crossing the border from Ukraine. Some were set on returning to Ukraine as soon as possible, but most of the refugees we met during our fieldwork in Norway expressed an intention or wish to remain in Norway, even if a peace deal were to be signed. Many came from areas now occupied by the Russians, or areas were dwellings, infrastructure and workplaces were heavily damaged, and feel that they have nothing to return to. Others do not trust in a peace deal with Russia and fear they would just have to flee again in a few years. Some of our respondents from Eastern and Southern Ukraine also say that they do not feel welcome in Western Ukraine and therefore do not wish to return to other areas of Ukraine if they cannot return to their homeland due to occupation.

Our respondents often enthusiastically emphasise elements of the Norwegian system that make them inclined to remain; in particular that Norwegian society is well-organised, predictable and gives economic stability. They also see possibilities in Norway, for example, for establishing businesses and for good quality education for their children. When saying that they want to stay, however, this does not imply that they are willing to stay illegally. 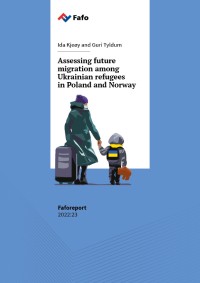