Hostage, inferior or trade union boss? Employee representatives have been enclosed by many different conceptions or opinions. The right to elect representatives by and among employee was introduced in Norwegian legislation in 1972, but the arrangement has not attracted much attention from academics or politicians. How do the representatives constitute their role? Do they increase the level of conflict? Are they able to promote employee interests? Does increased shareholder importance weaken their influence? Do they have an obligation to act in the best interests of the company or should they put em-ployee interest first?
Several sources of data are used when trying to elaborate these questions. Three surveys among employee representatives and managers have been carried out and also a number of qualitative interviews.

The questions are answered within the framework of Corporate Governance and Industrial Relations. The arrangement forms an important part of the Norwegian model of employee participation and co-determination. Shareholder value and independent boards are to a lesser degree a part of the Norwegian labour market regime. Employment, working conditions, value creation and the long-term running of the company are common goals both to management and the representatives. The powerful representative is characterised by combing the role of board member and trade union representative, by his (or hers) strong and informal relations to the CEO and by his ability to justify board decisions among the employees.
The arrangement seems to be uncontroversial among social partners at both macro and company level. However, the consensus is not based on the disappearance of the conflict of labour and capital, but on the fact that different interests may be fulfilled by the same arrangement. Everyone is in favour of codetermination and participation, some because it is good for business, others because it contributes to the democratisation of our working life. 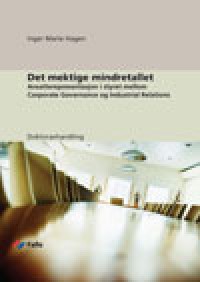