Forskere på Fafo: Mark Taylor Around the world, victims and lawyers are turning to the courts in order to hold businesses to account for involvement in serious human rights abuses. The scarcity of successful cases attests to the fact that the courts have little experience with such issues. The lack of effective remedy amounts to impunity for businesses involved in human rights abuse, yet governments may appear more likely to promote businesses' interests than hold them accountable for their involvement in human rights abuse. A change in government responses is needed urgently.
In 2009, practicing lawyers from a number of jurisdictions gathered in Oslo at the invitation of Fafo, Amnesty International and Noref to map out the obstacles to effective remedy facing victims of business-related human rights abuses. This report draws on that discussion to offer suggestions about an agenda for legal reform. The report forms part of a larger project which seeks to develop regulatory options for states in responding to the connections between armed violence and commerce. 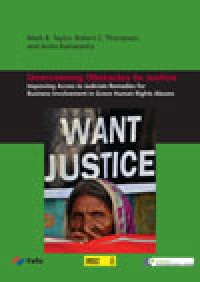