Jordanian Society is a wide-ranging exploration of living conditions in Jordan at the close of the twentieth century. Each chapter covers a topic central to the welfare of Jordanians: population, housing, economy, education, social networks, public life, children and health. A final chapter presents an overview of social conditions and development, and their implications for the future. The book offers a candid look at Jordan based on data collected through the Jordan Living Conditions Survey, a national survey of six thousand households. It is unique in the breadth of information brought together for the first time in Jordan.

Written by Jordanian and Norwegian researchers, this book is a result of a co-operation between the Department of Statistics of the Hashemite Kingdom of Jordan and Fafo Institute for Applied Social Science of Norway. The project was sponsored by UNICEF, IDRC/CIDA (Canada) and the Norwegian Ministry of Foreign Affairs. 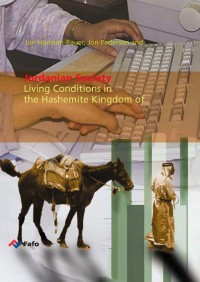