This report investigates political dynamics related to calls for political and economic reform in Jordan and the regime's efforts to move the reform process forward. Based on ethnographic fieldwork in four towns in 2011 and 2012, the main finding is that the protests in Jordan engage limited segments of the population and that the regime continues to enjoy considerable support. The silent majority often support democratic and econaomic change, but tend to value the country's stability more. Not only does the Jordanian protest movement engage limited segments of society, it has failed to unite around a common goal and is fragmented. Three main protest groups have emerged with different priorities related to political and economic development. The reform objectives of one group tend to repel other groups, which limits the protesters' political impact. In light of regional developments, the protests have still compelled the government to respond to some of the demands, although many protesters find the changes to be too small and coming too late. 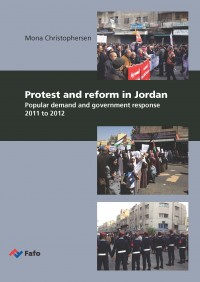