This report is the result of the third survey on continuing education for kindergarten teachers and management training for kindergarten managers (Siddiq & Gjerustad 2017; Jensen et al. 2018). The main finding in this year’s survey is the same as in the previous two: most of those who undertake continuing education and management training are very satisfied with their courses.

The report examines the experiences of kindergarten teachers and managers who have participated in continuing education and management training in 2018/2019, including their assessments of the courses. The main data source is a quantitative survey that was sent to all kindergarten teachers and managers who successfully applied to undertake continuing education as part of the strategy ‘Competence for the Future Kindergarten’ in the academic year 2018/2019. As part of the work for this report, we conducted telephone interviews to investigate changes in practice over time in the same four kindergartens in which we conducted interviews in last year’s survey (see Jensen et al. 2018). In addition, we interviewed five people who started a course but dropped out.

The results of the survey show that both the kindergarten teachers and the managers considered the courses to be good, relevant and interesting. In this year’s survey, we have added two new questions about the benefits of the lectures and the quality of the lecturers. The responses are in line with findings relating to other learning methods: the vast majority feel that they learn a lot from the lectures and that the lecturers are very good or good, regardless of the field of study or learning institution. Most participants found there was a good balance between theory, reflection and methodology. Those who felt there was an insufficient focus on an area highlighted the lack of work specifically related to aspects of their own kindergarten. This concurs with the findings of the previous two surveys. There may therefore be potential for improvement in this area. Some of the kindergarten teachers also reported insufficient guidance/feedback on assignments. This also concurs with the surveys in 2017 and 2018. Fewer of the managers reported this to be the case this year however, which may indicate that the learning institutions have made some changes.

The survey shows that most of the kindergarten teachers believe that they share the knowledge gained from the courses with the other kindergarten staff. In last year’s survey, the qualitative interviews showed that there was some variation between participants and managers in how much of the knowledge gained benefitted the kindergarten, and how much of the competence was actually shared. The four managers we interviewed at the time reported that the knowledge primarily seemed to have benefited the participant him/herself so far. In this year’s interviews, however, both the participants and managers seem to have seen a change in practice, including after the course was completed.

This year’s survey also reveals the importance of the educational grant, both for covering the individual’s expenses and for the provision of temporary kindergarten staff to cover periods of absence. In addition, it seems that most participants believe that the grant has been adequate, but those with a long journey time to the learning institution found it a challenge. This was highlighted by the participants both last year and this year. With regard to organisational facilitation in the workplace, the survey shows that provisions are made to permit most of the staff to participate in continuing education. The qualitative interviews in last year’s survey indicated that the large kindergartens had a greater degree of flexibility for facilitating the absence of staff taking continuing education.

The vast majority of those who take continuing education for kindergarten teachers and management training for managers complete their course. Relatively few report dropping out: 25 this year and 35 last year. The reasons for dropping out are complex, but several state that it is difficult to find enough time to study and carry out their regular job as well. In the interviews with five of those who dropped out, we found a low threshold for difficulties arising; a member of staff going on sick leave or resigning is often enough. This particularly seems to apply to small kindergartens, which have less flexibility and opportunities to juggle staff across departments than large kindergartens.

In general, we find that the vast majority, both kindergarten teachers and managers, view the continuing education provision in a very positive light. The learning outcomes are high, the syllabus is suitably challenging, and lectures and group sessions are considered beneficial. Most respondents report that taking the course benefitted them in their own daily work, and that the course has contributed to changes in practice. The managers are optimistic that the management training will help improve their management of the kindergarten.

Since more or less everyone is satisfied, or various conditions work for everyone, there is also no particular variation between background variables that we could otherwise have envisaged variation, such as learning institution, field of study or size and ownership of kindergartens. 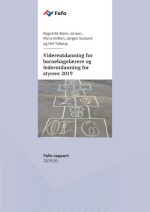