This report presents the results of a study of Norwegians' attitudes towards gender equality, hate speech and the instruments of gender equality policy. The study maps attitudes to the areas for potential discrimination that are currently protected under the Equality and Anti-Discrimination Act: gender, ethnicity, religion, beliefs, disability, sexual orientation, gender expression and gender identity. The analyses are based on a nationwide survey that was conducted in spring 2018 among 4,443 respondents.

Differences in the perception of equality and anti-discrimination policies can be understood in light of two different sets of attitudes. On the one hand, they are shaped by the perceptions of what limitations there should be on governmental power – if and how public agencies should intervene in employment processes or other decisions made by private participants, and where discrimination can occur. There will be also be different views on whether it should be a government’s responsibility to introduce measures to change attitudes and norms in their own population. On the other hand, attitudes to equality and discrimination are shaped by attitudes towards the groups that are protected by this legislation. In this report, we show that support for public equality measures and sanctions in cases of discrimination or hate speech also depends on which groups are subjected to it. This relates both to whether people believe that these groups are being discriminated against in Norway today, and whether or not such discrimination is perceived as legitimate. This adressses a fundamental prerequisite for gender equality policy, namely whether there is a consensus that women and men, gays, bisexuals and lesbians, transgender individuals, people with disabilities, Muslims, Jews and Christians should have equal rights and opportunities in Norway, and whether discrimination is considered to be more understandable for some groups than for others. The relationship between these two components – the attitudes to the groups and the attitudes to the equality policy itself – is a key issue in this report.

The report presents the results of a survey conducted in spring 2018 among 4,443 respondents within a nationwide sample. The data was collected by IPSOS, an independent survey agency. The survey combined ordinary questionnaire questions with vignettes (questions that take the form of slightly longer texts, where the respondent gets a more detailed description of a case and is then asked to evaluate if this is a case of discrimination or hate speech and what the appropriate reaction would be). These vignettes were combined with an experimental survey design. This entailed dividing respondents into six sub-groups, which received almost identical questions but where we varied one or two elements in some of the questions. This made it possible to compare responses to vignettes where, for example, a gay person is subjected to discrimination with an identical case where persons with disabilities are discriminated against in the same way. The advantage of such a design is, among other things, that the respondents are not aware of which characteristics vary systematically and it is therefore more difficult to respond in line with what they believe is “expected” or “correct”. Additionally, we have in some analyses drawn on data from the European Social Survey.

Our analyses show that there is broad support for gender equality in Norway. Only 2 percent agreed that men should be given priority if there is a shortage of jobs. However, we found that after the financial crisis in 2009, when there was a shortage of work and austerity measures were implemented throughout the EU, there was an increase in the number of respondents who believed that men should be given priority, both in Norway and in other European countries. This proportion had fallen back to a lower level than before the financial crisis by 2016.

Although there is broad support for the idea of gender equality, there is considerably more disagreement between different groups when we ask whether we have achieved equality in Norway today, and whether it is necessary to continue with equality policies to secure equality between men and women. People without higher education responded more often that they do not believe that men and women are treated equally in the labour market today compared with people from a higher education background.

This can be interpreted as an outcome of different experiences in the labour market, where people employed in high-skilled jobs largely witness a sense of equality between men and women, while the labour market for the unskilled and those without higher education is less likely to be experienced in this way. Despite this, we find broader support for gender equality measures (such as positive discrimination and paternity leave) among people with higher education than people with lower income who are less educated.

There was broad support for paternity leave across gender and age groups. 82 percent agreed, in whole or in part, that it is best for all parties if men take paternity leave. This is the only gender equality policy that received equal support among both men and women and we found only marginal differences between different age and education groups.

Our study confirmed previous research findings that showed that younger age groups are less supportive of gender equality measures than older generations. However, although there was less support for gender equality measures in the youngest age groups than among the older, there was still a significant increase in support for measures promoting gender equality for the population as a whole. Yet more than every third man and every fifth woman agreed that so much emphasis is placed on helping weak groups today that we end up discriminating against white Norwegian men.

Roma, Romani and Muslims are the groups most people believe to be the victims of discrimination in Norway. Of all the groups that are protected under the Equality and Anti-Discrimination Act, these are also the groups that are least popular as a potential prime minister, neighbour or spouse. The Roma or gypsies is the group that received the greatest opposition in terms of being potential neighbours; 38 percent say that they would rather not have Roma or gypsies as neighbours, and there was almost the same degree of opposition towards this group as towards having neighbours who are alcoholics or mentally unstable. One in six said they would not like to have Muslims as neighbours. Roma and gypsies are also the group that received the most opposition in terms of being a potential prime minister or as a potential spouse of a family member.

The respondents were presented with a vignette in which a housing cooperative rejected a lease on the grounds of ethnicity, "race" or religion. We found that there was much less willingness to force a housing association to reverse such a decision if the person subjected to discrimination was a Muslim or a Roma, compared with a Sami or Thai person. There is thus considerably less willingness to intervene if Roma or Muslims are discriminated against than if other groups are exposed to the same discrimination.

In another vignette, respondents were told about a company that was hiring an IT consultant but did not choose the most qualified candidate, due to religion, disability or gender identity. We found that there were four times more people who think it is necessary to react if a woman in a wheelchair does not get a job even if she is the most qualified person than if it were a woman with a hijab. Both cases are about women who are discriminated against, but more people think that the government should react if the woman is in a wheelchair than if the woman is discriminated against because she wears a hijab.

There appears to be little knowledge in the population about the experiences of people with disabilities in terms of discrimination and hate speech. Respondents most often say that they do not know whether people with disabilities are regularly subjected to discrimination. More people believe that men and ethnic Norwegians are subjected to more extensive hate speech than those who have a hearing impairment or are blind.

The discrepancy between the will to use resources for equality measures and the unwillingness to recognise that this group is discriminated against can be understood in light of how people with disabilities often are understood, as a group for whom we have low expectations. Such low expectations can make it difficult to see the limitations for their participation in the labour market and other arenas, as their low degree of participation is perceived as "natural" and not as a consequence of a lack of facilitation, discrimination and other structural constraints.

Over the last few decades, there has been increased acceptance in most European countries for letting gays and lesbians live their lives as they wish and allowing gays to adopt. We also observe this development in Norway, but the changes are relatively modest. The acceptance of gays is somewhat lower in Norway than in neighbouring countries to which we usually compare ourselves in relation to equality issues e.g. Sweden, the Netherlands and Iceland.

There are significant differences between different social groups in terms of their attitudes as to whether gay couples should be allowed to adopt. The differences are particularly large between age groups; opposition to gays adopting is more than twice as large for those over 34 compared to those below, and women are far more open to gay adoption than men.

People who claim that religion is very important in their life are more strongly opposed to transgender people working as teachers or being part of their circle of friends, and they are far more sceptical of gay adoption than people who say that religion is not important to them.

Today's legislation does not cover hate speech on the basis of gender, gender identity or gender expression. However, the will to sanction hate speech is not lower when women and transgender people are exposed to this than when gays and Muslims (who are protected by law) are exposed to the same. There is greater willingness to punish a hateful expression directed at an individual (in our examples a bouncer in a pub) than if it is aimed at a group in a post on social media.

There is broad support for a publicly funded policy of equality and anti-discrimination in Norway, and only 7 per cent say that they do not think it is right for the government to use resources to promote equality and fight discrimination for any of the groups that are currently protected under the Equality and Anti-Discrimination Act. There is more disagreement about which groups should be targeted by such an equality policy; support is highest for equality measures for people with disabilities and lowest for transgender people.

The differences in equality policy become more prominent when we ask about attitudes towards concrete measures. The majority do not want positive discrimination in recruitment processes in the public sector or authorities to use resources to ensure increased minority representation in films and other channels of culture. The attitudes to these instruments are largely consistent across the groups that are protected by the Equality and Anti-Discrimination Act.

When we look at the willingness for discrimination to be formally sanctioned, there are greater differences according to which groups are being discriminated against. These differences become especially prominent when we ask people to consider whether the government should be able to demand that discriminatory decisions be reversed; far more people think it is right to demand that an employer or housing association reverse a discriminatory decision if a person with disabilities is discriminated against than if a Roma or Muslim is exposed to the same discrimination. There is wider support for equality measures and for prosecuting discrimination and hate speech when women and disabled people are exposed to this than when the victims are gay, transgender or from religious and ethnic minorities. This is despite the fact that when people are asked which groups they believe are discriminated against in Norway today, far fewer believe that women and people with disabilities are subjected to discrimination than LGBT people and those from ethnic and religious minorities. 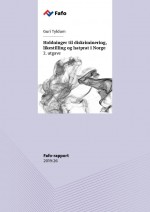