Monitoring Social and Economic Development of Western China (MEDOW) is a large scale survey of living conditions for households in Western China. The project is financed by the Norwegian Foreign Ministry and developed and implemented as a part of the long-standing cooperation between the National Center for Science and Technology for Development (NRCSTD) based in Beijing, China and Fafo Institute of Applied International Studies in Oslo, Norway.

The aim of the Project

The project aims to establish baseline indicators of social and economic conditions for households in Western China, and thus contribute to the knowledge needed to be able to engage with some of the challenges faced by the Western regions of China. The survey is comprehensive and multi-topical and collects data on population, infrastructure, education, labor markets, health, household economy, agriculture and environmental conditions, as well as a number of other issues. Careful measures have been taken to integrate a full gender perspective to the survey and to make sure that all groups of the population are represented in the results (whether it is men, women, poor or ethnic minorities). 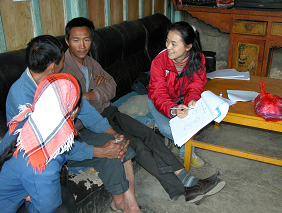 Through close and valuable cooperation with local universities and thorough training of students and staff, the project has acted as an important tool for competence building in modern social sciences within academic milieus in Western China.

The MEDOW survey is a relatively standard households survey that cover a large extent of topics and issues. The survey is conducted on household level, but includes information about all the individuals in the households. There is also an extensive survey of communities in which the sampled households live. For more information on the development of the questionnaires and the sampling frames go to: Questionnaires or Sample selection for the MEDOW survey

What are the results?

An overview and a small presentation of results are available for download from this site. "A Taste of MEDOW" presents some of the main findings in the Tabulation Report and the Socio-economic Atlas.

Use of the Survey results and References to the media coverage

The results of the survey have been used as background for several reports to the Chinese government and for new articles. Below is a small sample: