During the last years, the face of Russia has changed. The largest country on earth has left communism and the planned economy behind, and is on the road to a democratic order and reintergration into the world community. Meanwile, the Russian economy continues to be in transition, as the legacies of the past gradually disappear, and a new order slowly emerges. How does this transition affect the average Russian? The present report describes the impact of ongoing reforms on the daily lives of the population in two selected areas; the city of St. Petersburg and the Kaliningrad enclave. Based on a survey carried out by Fafo in cooperation with local institutions in late 1994, the report reviews a selection of living conditions factors, as housing, employment, health, exposure to crime, as well as political attitudes and responses to the reform process. The report describes how individuals and households adapt to changing circumstances, and develop strategies to cope with new realities.

The present study forms part of the NORBALT Living Conditions Project, comprising a total of five parallel surveys in the Baltic states of Estonia, Latvia and Lithuania, as well as in the city of St. Petersburg and the Kaliningrad enclave. 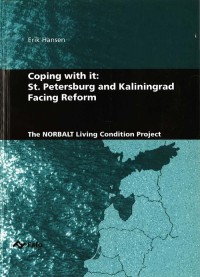