In 1998, PICCR brought together a group of Special Representatives of the UN Secretary-General (SRSG), as well as senior managers from the UN, to discuss practical ways to strengthen UN peace operations. The report of that meeting, Command from the Saddle, identified the need to examine the financing of peace-building with a view to identifying the role of financial mechanisms in mission effectiveness. In The Conjurers’ Hat, the authors examine the financing of ten missions led by SRSGs during the period 1992–2001. The report also describes the internal reform processes related to the financing of peacekeeping and peace-building, including the impact of the Panel on UN Peace Operations in 2000 and the different voluntary funding mechanisms that have arisen over the years in support of peace operations.
This report was commissioned jointly by the Center on International Cooperation, New York University and the Programme for International Co-operation and Conflict Resolution, the Fafo Institute. Support for PICCR’s Peace Implementation Network project is provided by the Government of Norway and the MacArthur Foundation. 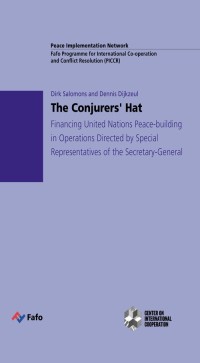