This report presents the results of a study on the living conditions for the children and youth less than 18 years of age, involved in alluvial diamond mining in Kono district in Sierra Leone. The production process, and the work tasks for the children are also thoroughly described. There are mainly three groups of children involved in the alluvial diamond mining: the direct workers, who are mainly boys 14 years of age or above; the children with support functions, younger boys and girls bringing food and water, running errands and doing other small tasks to support the direct workers; and the petty traders, also boys and girls going around in the different diamond fields, selling goods to the workers. The report is the fourth report in a series of working papers from a Fafo research programme on child labour, generously financed by the Norwegian Ministry of Foreign Affaires. 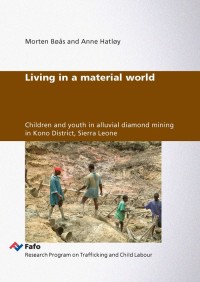