This report attempts to ‘feel the pulse’ of the efforts related to the UN 2030 Agenda for Sustainable Development in three professional unions affiliated with the Unio federation. The report is based on interviews with 23 representatives and regular members of the Union of Education Norway, Norwegian Nurses Organisation and the Norwegian Association of Researchers, meetings with the project’s reference group and various written sources (primarily information from the unions’ websites and reports from UN institutions, the Norwegian government and Norwegian public agencies). The interviews with the unions’ representatives and members are the main basis for the report. The questions we ask include:

First, we give an account of «Transforming our world. The 2030 agenda for sustainable development» (UN 2015) and the importance of the professions for a knowledge-based implementation of the UN agenda. We highlight the way in which the 17 SDGs are intended to have a synergistic effect, meaning that if a single goal is pursued without considering the consequences for the other goals, overall progress may be jeopardized, weakened or eliminated. Furthermore, we describe the UN agenda as a coherent strategy for a so-called transformative change, locally and globally, which implies a new eco-social development model that gives precedence to social, ecological and environmental concerns above decisions based on the need for economic growth.

Thereafter we give a brief account of the sustainability policies of Unio and the three trade unions. We also describe the types of enterprises where our informants work before we turn to the analysis of the interviews. We categorise the informants into four (ideal) types according to their commitment to the UN sustainability agenda, across trades/professions:

There are elected union representatives and regular members who more or less fit these (ideal) types in all three professional unions. The interviews nevertheless indicate that the three unions are different in some respects. This may to some extent be due to conditions that are specific to the profession in question, but the differences may just as likely, or also, stem from the workplaces and the types of work performed there. The differences may obviously also be affected by the professional unions’ respective ‘profile’ in their sustainability policies, but the report does not discuss this in detail. The report does not undertake a systematic comparison of the informants across the three unions, but a presentation of key features of their work and attitudes helps elucidate the specific nature of each profession.

Our meetings with trade union representatives and regular members from three unions affiliated with the Unio federation showed that the competence level regarding the UN’s sustainable development agenda varied considerably. We found inadequate levels of knowledge even among some trade union representatives in enterprises and organisations that emphasise the SDGs. This indicates that there may be significant knowledge gaps among rank-and-file members. However, there are many who take a lively interest in the SDGs, the interrelation between them and the changes and restructuring it will require to reach them. Some have even placed the SDGs at the core of their activities. We found a considerable understanding of the SDGs and a wish that competence about them should be enhanced, that education programmes should be reformed, that the professional unions should engage vigorously in these issues both nationally and locally, and that interdisciplinarity and cross-sectoral cooperation should be included as key elements in the efforts to achieve the SDGs. Several informants called for increased local participation in the work with the SDGs and were concerned with ensuring that employees and local trade union associations be consulted when decisions about restructuring made necessary by environmental requirements and concerns for sustainability are made, or in other words, that the right to co-determination be given a specific content in this area.

The report submits some proposals for ways in which Unio and its member unions can bring their work with the UN agenda for sustainable development and the SDGs forward. These are:

As a final note, it must be underscored that the report is based on relatively modest underlying data. The findings in the report can therefore not be claimed to be representative or present a final word on what is underway in the professional unions and their memberships in the area of sustainability. We nevertheless believe that the interviews provide important insights into the level of knowledge and commitment to sustainability among elected trade union representatives and rank-and-file members and that the various experiences and attitudes among our informants are common to the three unions. 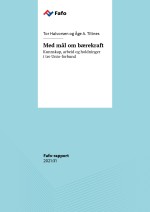