Attitudes to unionisation. A survey among employees

In this report we explore the reasons why employees choose to join a trade union and their attitudes to the unions and collective institutions in working life. What rationale do the employees give for their choice, and for what reasons do approximately one-half of all Norwegian wage-earners refrain from joining a union? In particular, we focus on whether young employees have other attitudes to unionisation and the collective arrangements in working life when compared to older generations, and investigate the differences between employees with and without higher education, and between members in the various trade union confederations. We also wished to explore the ways in which the union members were recruited, as well as whether non-unionised employees have been actively offered membership. Are members still recruited in the workplace? And what is the effect of the student membership scheme?

The analyses are based on a survey undertaken among 2982 employees aged 18 and above in April and May 2019. The survey was undertaken by Norstat as a telephone survey.

The most common rationale for joining a trade union is that employees want help and assistance if they should run into problems in the workplace. Many others highlight the important job that the unions do for employees, and believe that joining a union is the right thing to do. Unionised workers place less emphasis on the fact that it is common to be unionised in their profession or workplace, although some also give this as a reason. The emphasis placed on individual membership benefits is far smaller than for other reasons given for joining. There are only minor differences between unionised workers in terms of age, education or trade union confederation.

The most common reason for remaining non-unionised is that those employees prefer to negotiate their wage level and labour conditions themselves. Approximately 60 per cent highlight this as a key reason for not joining a trade union. Nearly as many report that they enjoy the same benefits without being unionised. A little less than one-third argue that trade unions have become superfluous in modern working life. Some also give situationally dependent explanations, such as not having been able to find a suitable union, that there is no union organisation in their workplace, or that they do not know how long they will remain in their current workplace. A minority of 14 per cent refer to employer hostility to unionised workers, while 30 per cent find the membership too costly.

Employee characteristics do little to explain the reasons that are chosen. The youngest employees do not appear to be more individualistic than the others; on the contrary, the proportion that wish to negotiate their own conditions is lowest in the younger age groups. The same applies to the proportion believing that trade unions have become superfluous.

The majority of the non-unionised workers will consider joining if they can find a suitable union, if they should come to a workplace where this is common, or if the workplace proves to be insecure. Only a minority rejects the possibility of joining outright and irrespective of the situation. Younger workers state more frequently than others that they will consider joining, given certain preconditions. Workers who are older and have long workplace seniority are less prone to consider a membership as relevant. One explanation could be that when compared to younger age groups, this group of workers may have more fixed views regarding unionisation.

Non-unionised workers who report that it might be relevant for them to join a union would emphasise the union’s wage policies for their profession or that the union speaks for their occupational group or profession as potential reasons for joining. Some emphasise the size of the union dues and individual membership benefits, but only a minority report that this would be a deciding factor in their choice.

Approximately one-half of the non-unionised workers have been asked to join, in their present or previous workplace. They were mainly asked by the trade union representative or by their colleagues. The proportion who have been asked is higher among those whose workplace has a trade union representative, and this applies especially to those who have remained in the same workplace for some years.

Norwegian employees generally endorse the organised labour market in its traditional sense. The majority (70 per cent) rejects the assertion that trade unions represent an old-fashioned solution, and four of every five fully or partly agree that strong trade unions are an advantage for most employees. Views differ more when it comes to individual wage formation, whether the right to go on strike is an important component of wage formation in Norway, and whether more workers ought to join unions. When asked whether wage differences have become too large, far more respondents agree than disagree. Age has little bearing on the variation in attitudes to the trade unions and the organised labour market. The study does not indicate that young employees are more sceptical than others about the collective institutions in organised working life. However, young people are somewhat more accepting of individual wage agreements. Unionised employees tend to consensually endorse the organised labour market. This may indicate a reverse correlation, in the sense that unionised workers over time develop a positive attitude to trade unions and employee associations.

We also asked the employees to rate their agreement or disagreement with a number of statements about the Norwegian Trade Union Confederation (LO). In total, 59 per cent of the respondents agree that a strong LO is an advantage for employees in general. Members of LO unions most often endorse this view, but a majority of the members of unions in other confederations also agree with this assertion in favour of LO. Among the non-unionised there are far more who endorse this view than not, although one in every four in this group disagrees with this assertion. There is more variation when it comes to whether LO is suitable for ‘employees such as yourself’ and whether LO safeguards the interests of employees with higher education. Many disagree with this – especially non-LO members – and there is also considerable uncertainty about the latter assertion.

There is a clear correlation between attitudes to collective working life and consideration of joining a union. Non-unionised employees who take a positive view of the role of the trade unions in working life are far more open to considering membership when compared to other non-unionised workers. 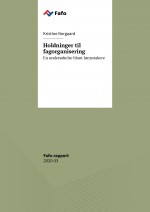