We have used various data sources to describe developments in the different forms of employment contracts/relationships. The Labour Force Surveys (LFS) are a key source, and we have conducted three additional surveys, with a particular emphasis on temporary employment. We also use the LFS panel to identify transitions between different statuses in the labour market. Employers’ staffing strategies are mapped in a separate survey of enterprises in the private and public sector. We have also used various other data sources to describe the temporary work agency sector and the proliferation of temporary agency workers.

In 2017, 8.4 per cent of the employees stated that they were in temporary (fixed-term) employment. This is slightly higher than in 2014 and 2015, but slightly lower than in 2016. In a longer term perspective, the share of temporary appointments has remained stable over the past decade. The share in temporary employment is highest among young workers, and this group has also seen a slight increase in the last three to four years. Women are more likely to be in temporary employment than men, and gender disparities are stable over time. Employees whose highest level of education is lower secondary are more likely to be employed on a temporary basis than others, but the disparities due to education are otherwise small. A multiple regression survey taking different employee characteristics into consideration showed that those with the lowest and highest education levels have a higher probability of being in temporary employment than others.

Temporary employment is most common among part-time employees, and particularly among those who combine part-time work with another main activity, such as education. Employees who are new to the workplace are often employed on a temporary basis, while the share of temporary employees is low among those who have been with a company for three years or more. This means that many new employees are initially offered a temporary position, and are then either transferred to a permanent contract or their employment is terminated.

The majority of employees either have short-term contracts or do not have a fixed leaving date. Only 10 per cent say that their current employment contract is for more than one year forward in time. Many temporary employees are relatively new to their workplace, while about one-fifth have been employed for two consecutive years or more.

In 2016 and 2017, we asked whether employees were temporarily employed on the basis of the new provisions in the general clause of the Working Environment Act. Fifteen per cent of temporary employees said that their employment was based on the general clause, 52 per cent replied that it was not, and 33 per cent were not sure. This is a difficult question for new employees to answer, and those who responded in the affirmative were not particularly distinct in any way to those who said no. We are therefore uncertain as to whether the employees understood and answered this question correctly.

The second form of labour market attachment we have examined in the project is temporary workers from employment agencies. The two most important data sources in this regard were Statistics Norway’s employment statistics, which show the number of employees who are employed by temporary employment agencies (NACE 78.2), and statistics from employer association NHO Service og Handel, which pro-vide invoiced hours and turnover in member companies within the employment agency sector. Neither of these statistics give a complete picture of the number of temporary agency workers in the Norwegian labour force. We therefore supplement these two sources with other types of data where possible, including information from customers about expenditure on temporary staff services.

We have attempted to calculate the percentage of employment that takes place in the form of temporary agency workers. Although it is not possible to provide exact estimates, various calculation methods show that temporary agency workers account for between 1.5 and 2 per cent of total full-time equivalents in 2017. The share more than doubled during the period 2003–2017.

The employment agency sector in Norway has a large element of labour migrants, including short-stay workers. Employment statistics show that more than half of all employees in the sector in 2017 had an immigrant background, with the vast majority hailing from EU countries in Eastern Europe. The number with a back-ground from Nordic countries fell sharply from 2007/2008 to 2017.

Much of the growth in the sector since 2006 has been due to temporary agency work in the construction industry. Agency workers account for about 6 per cent of the full-time equivalents in construction. Statistics from the Norwegian Federation of Service Industries and Retail Trade show that there are significant geographic differences, and that Oslo has the highest share of temporary agency workers.

The share of temporary agency workers in the health and social care sector has remained stable in the last 5–6 years, and constitutes approximately 1 per cent of the full-time equivalents.

The LFS only reflects the employment situation during a specific week (the reference week). Short-term jobs can therefore be inadvertently excluded. We also asked how many people had worked as freelancers or independent contractors during the past year. In 2016, 7.5 per cent of those in employment reported that they had undertaken such work, and 3.4 per cent stated that this was their main job. The majority of the independent contractors operate under a sole proprietorship (enkeltpersonforetak).

Transitions between different statuses in the labour market

In the LFS, the same person is interviewed eight times in 21 months, which enables us to examine transition rates between different statuses in the labour market, with a particular emphasis on transitions to and from temporary employment and unemployment.

About 80 per cent of temporary employees are working one year after the first interview. Of these, just over half are in a permanent job, while 27 per cent are still temporary and 2 per cent are self-employed. After 21 months, the share in work is still about 80 per cent, but some more have transitioned to permanent employment. Eighteen per cent are still employed on a temporary basis. The share that transitioned to unemployment is 4–5 per cent for both periods and the share is approximately the same after 12 and 21 months. There are only small disparities between interviews that were conducted prior to and subsequent to the introduction of the general access to temporary employment of up to one year.

Among those who were unemployed at the first interview, about half are working after one year. The majority have a permanent job (27 per cent for those who started the interviews in 2015/2016), but some are also in temporary positions (18 per cent in the same period). These figures suggest that the probability of transitioning to a temporary position is slightly higher for those whose first interview was in 2015/2016, compared to those who were interviewed earlier. Simultaneous to this, several transitioned to educational activities in the final part of the survey period. The situation in the labour market may play a role in this context, and the number of interviews is also quite low. Therefore, we cannot conclude that this has changed over time.

From a retrospective perspective, we can see that self-employment is the most stable status in the sense that there are few in this category who have experienced temporary employment or unemployment, or who have transitioned to education. If we narrow this down to the self-employed with no employees, stability is slightly lower, but the group still has more stable careers in the labour market than permanent employees. Thus, these figures indicate that the transition rate from unemployment and temporary employment to self-employment is not particularly high.

As part of the project, a survey was conducted in 2016 of enterprises with at least five employees. This is reported in a separate note (Nesheim 2017). The survey showed that 55 per cent of enterprises had appointed temporary employees in the last year. The share was highest in the state sector and among the largest employers. The most common reasons for employing staff on a temporary (fixed term) contact were the need for extra capacity and for temporary cover, which is in line with the data provided by temporary employees themselves about the characteristics of their employment. Thirty per cent of the enterprises reported that they had hired temporary agency workers during the past year. The share was highest among manufacturing and construction enterprises, with extra capacity given as the most common reason. In the public sector, temporary agency workers were mostly used to cover temporary leave. Thirty per cent of the enterprises had used the services of independent contractors or freelancers. There are only small differences by sector and industry, and there is less variation in the size of the workplace than for the use of temporary agency workers and temporary employees. The main reasons for using freelancers/independent contractors was to provide extra capacity and to obtain specialist expertise for a limited period of time.

In the project on forms of employment relationships/contracts/, we have followed developments in what is often referred to as atypical employment, and considered whether this has become more common among the labour force in Norway. The situation is characterised more by stability than by change. In conclusion, we try to form a picture of the current labour force in Norway in terms of forms of contract, and have also included part-time work with short and long hours.

The figure below shows that two-thirds of employees in Norway have a traditional form of employment in that they are permanent employees in full-time positions. A further 9 per cent have this attachment but work long part-time hours. In Norway, such jobs will not generally be considered to be atypical or insecure. In addition, there are self-employed persons in the primary industries and self-employed persons with employees, who are also close to the general understanding of what is considered typical or traditional forms of employment. These four categories combined account for 79 per cent of the population in work.

The share with a typical/traditional form of attachment is stable over time, and this also applies to atypical attachments as measured in the LFS. It is also possible to compare Norway with the EU as a whole. On average, more people are employed in typical/traditional forms of attachment (permanent full-time work, permanent part-time work with long hours and the self-employed with employees) in Norway than in the EU. The disparities are fewer among young people than for the group aged 25–54. One important explanation is that many young people in Norway work short part-time hours, which also reflects the large numbers combining education with an extra job. In the EU, there are more young people in the category ‘self-employed with no employees’ than in Norway, where this group accounts for about one per cent of the working population under the age of 25. 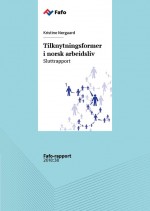