The grey zone between the regular labour market and human trafficking

The objective of this report is to provide more knowledge and devote greater attention to gross exploitation in the labour market. Some workers are in a grey zone between the regular labour market on the one hand and a situation that falls under the provisions on human trafficking/forced labour in the General Penal Code on the other.

The purpose of this project, on assignment from the Church City Mission in Oslo, was to summarise the experience that the organisation has accumulated through its efforts on behalf of workers who have been grossly exploited. Moreover, we have looked into the barriers that prevent this group from accessing their rights, as well as the assistance programmes that are available.

In addition to interviews and focus groups with staff members who engage with these issues in the Church City Mission, the report is based on a total of 48 qualitative interviews that were undertaken during the period 2019–2021.

The Church City Mission maintains a low-threshold programme in which building trust is a key element. This provides the organisation with valuable access to issues and groups that the support services otherwise fail to reach or learn about. Good relationships are essential for revealing possible cases of gross exploitation or human trafficking in the labour market. Some victims are referred for follow-up and counselling, and the police are contacted in cases where criminal activity is suspected.

The workers described in this report tend to be at the bottom rung of the ladder in working life, and will often be in need of help with food, clothing and shelter in addition to the matters related purely to labour law. For the Church City Mission, challenges arise where the needs of the exploited workers are related to working life, civil law or criminal law. These lie beyond the organisation’s normal sphere of activity. The fact that no other agency holds an overarching responsibility means that these cases are especially difficult to handle. There is uncertainty as to the kinds of risk an intervention may entail for the workers, what type of assistance can be given and to where this assistance will lead.

It is impossible to quantify the number of grossly exploited workers. It is likely, however, that the problems at the bottom of the labour market are underestimated in many quarters. In the long term, this exploitation may entail serious consequences for the Norwegian labour market model, including for bona fide employers. A better understanding of how prevention and combatting of gross exploitation benefit society is therefore required.

Many will claim that in current legislation there is a gap between the regulations in the Working Environment Act and the General Application Act on the one hand, and the provisions on human trafficking in the General Penal Code on the other. Individual workers can either pursue a case as a civil lawsuit, for example regarding wage payments, or the authorities can pursue the case as human trafficking. This poorly reflects the sliding scale that various types of pressure and coercion may constitute in real life.

Further barriers include access to legal aid, the length of time needed to bring a case through the courts, and lack of Norwegian language skills and knowledge of Norwegian employee rights. Filling these gaps, in terms of regulations and government grants to predictable support schemes for workers, may help prevent cases of grossly exploited workers from going largely unresolved.

Many of our informants call for a kind of ‘trafficking light’ provision in the General Penal Code, i.e. a provision that encompasses situations that involve exploitation, but without the same requirements for evidence of coercive elements as for human trafficking. Finland has a type of legislation that can meet these criteria. Something can also be learned from the measures that have previously been applied with regard to prostitution in Norway.

In Norway, the National Prosecuting Authority has called for a provision that criminalises gross exploitation of workers even where no coercion is involved. Others have pointed out that new regulations will be unhelpful unless provisions are made for better compliance.

Non-payment of wages, so-called wage theft, is one of the most widespread problems for this group. New provisions on wage theft were introduced in the General Penal Code in 2022. Typical examples are employers who fail to pay wages or pay wages that are too low according to statutes or collective agreements. Since 2022, the sentencing framework in the Working Environment Act has also been increased, partly with a view to signalling the degree of seriousness of the violations. However, it may take years to bring a case pertaining to wage payment through the legal system, and there is a large and unmet need for free legal aid.

The trade union movement has little contact with this aspect of working life. The grossly exploited workers are not unionised, and it seems unrealistic to expect them to contact public authorities, for example the Labour Inspection Authority. Language problems and the high threshold for obtaining social assistance further add to these problems. The needs for assistance are wide-ranging and call for skilled social workers with relevant language and cultural skills, as well as legal competence. Currently, these services are spread out mainly among voluntary organisations. To improve the situation for this group, we could envisage a collaboration between the charitable organisations and the social partners, with financial grants from the government.

‘We don’t understand poverty’. This is a quote from an interview conducted in the context of this project. Those who are born and bred in Norway may have difficulty understanding the situation of grossly exploited workers. This is a kind of poverty to which many Norwegians are unaccustomed and with which we are rarely confronted. Many of those who are grossly exploited provide for their families back home, have no social safety net, and are often in acute need of an income. Their encounter with certain parts of Norwegian working life may be brutal, and the responses from Norwegian society may seem helpless. There is a need for a stronger linkage between providing assistance and combatting crime, in addition to preventive measures. 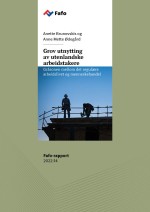