The role of the assistants in kindergartens

In Chapter 2, we use various statistical sources to paint a picture of the developments in the kindergarten sector over the past two decades. The main finding is that a large number of new kindergarten places were created due to the kindergarten reform. The growth mainly took place in private kindergartens, and the average size in terms of numbers of children has increased markedly. The assistants in private kindergartens are generally younger than in municipal kindergartens and are more likely to work full time. Male assistants are significantly younger than their female counterparts and are more likely to hold full-time positions. Labour migrants (EU 10) and those from countries outside the EEA have a higher tendency to work full time than those born in Norway, both in the private and the municipal kindergartens.

In Chapter 3, we use qualitative interview data from four case kindergartens. The essence of this chapter is the different participants’ assessment of the role of assistant and the need for formal qualifications. The main finding is that unskilled workers seem to be finding it increasingly difficult to get a permanent job in municipal kindergartens. Staffing agencies seem to provide an increasing proportion of the staff on short-term contracts in kindergartens. In the four case kindergartens, the directors and educational leaders emphasise that there is an important difference in the competence of skilled workers and unskilled assistants in many areas. In the kindergartens in question, unskilled assistants were able to undertake an apprenticeship through the work experience scheme. The assistants think they are unlikely to be offered other tasks or responsibilities in the kindergarten on the basis of an apprenticeship in children and youth work; their main motivation is greater security in their current role and to safeguard their future employment prospects.

In Chapter 4, we summarise the main findings and highlight some challenges concerning structural changes and competence needs in the sector, and the role of assistant. We also point to challenges in the intersection between the labour market adaptation of experienced assistants, where many choose to work part time, and the challenges in making children and youth work studies more appealing to young people. In the current climate, young people who attain qualifications in children and youth work find it difficult to secure full-time positions in the sector after completing their apprenticeship. 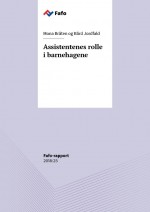