Language skills are important to find a job in Norway, and employers regard ‘poor command of the language’ as a key and legitimate reason for rejecting job applicants with an immigrant background. This has been shown by previous research and is confirmed by our findings. In this report we have sought to address questions regarding the way in which employers assess the Norwegian language skills of job applicants with an immigrant background in a recruitment process. The questions have been addressed with the aid of a number of different data sources, quantitative as well as qualitative.

The analytical framework that we have applied deals with the matching of a job seeker and an employer in a recruitment process. There are (at least) three main perspectives that can be applied to understand the differences in employment between the majority and minority populations. The first focuses on the immigrant job seeker’s competence, both formal and informal. The second deals with the employers and how they assess the job seeker and his or her skills, and the third highlights structural conditions. For an employer to assess the job seeker’s skills as relevant, the job seeker must be able to signal their skills in a way that inspires confidence.

This report highlights language skills, which are a type of competence. The Norwegian language test can be understood as a method for formalising and standardising language skills as a type of measurable competence. However, language goes beyond mere linguistic issues; it concerns communication in a broad sense. It is the key to social and relational aspects of human interaction and can be regarded as a type of ‘soft skill’ which is difficult to measure and standardise. What it means that a job seeker with an immigrant background possesses good language skills is therefore not so easy to ascertain. In this report, we have explored exactly this question. What do employers mean by saying that job seekers with an immigrant background need to have good Norwegian skills, and not least, what methods and tools do employers use to assess the language level of job applicants?

The Norwegian language test fails to function as intended

From previous research we know that the better the language skills that a job applicant has, the more likely this person will be to have a job and earn a better income (Blom 2017; Chiswick 2008). We also know, however, that the employer’s assessment of the candidate’s language skills do not always reflect the reality. An employer can feel uncertain about the applicant’s language skills because he or she has a foreign-sounding name.

To address this question we have used a number of different data sources, including an enterprise survey with a survey experiment, a field experiment supplemented by qualitative interviews with participating employers, and existing qualitative interviews with employers that were undertaken in connection with another field experiment in 2011–2014. Even though one in every three of the respondents to our survey report to fully or partially agree that a completed B2 level Norwegian language test provides sufficient information about language skills, the other data sources show that employers in fact make little use of this information in their recruitment processes. In the field experiment, we find no significant differences in the likelihood of being invited for a job interview between candidates with and without a completed B2 level language test. Findings from the survey experiment show that significantly more employers believe that a candidate who has not passed the language test, but writes that she has a good written and spoken command of Norwegian, provides sufficient information about her language skills when compared to someone writing that she has passed the B2 level language test. It thus seems that for employers, the job seeker’s self-assessment has a higher information value than the language skill standard. Since one of the objectives of the Norwegian language test was the opposite, to make the recruitment process more objective and neutral and less subjective, the language standard does not appear to function as intended.

There can be many reasons for this. Based on the survey and the qualitative data, both new and existing, we find that many employers have little familiarity with the Norwegian language test, nor with its different levels. Many of the informants who report to be familiar with the test also report to have little confidence in its objectivity. For some, the level that a candidate succeeds in achieving in the test appears to be random. Their concern is that although a candidate prepares intensively for a test and achieves a good result, this will not necessarily be an indication of the candidate’s real language skills, such as would come to light in a work situation. Moreover, we find that for many employers, language skills go beyond mere linguistics and grammar. Many of the informants mentioned the importance of ‘communication’ in the broad sense. Language includes norms, culture and humour, which cannot be captured by a test, it is claimed.

How do employers assess language skills?

If the Norwegian language test fails to function as intended, what types of information are employers actually using to assess the language skills of immigrant job seekers? As noted above, we know that references to language skills are frequently used to legitimise rejection of job applicants from immigrant backgrounds, and it will therefore be important to understand what kinds of signals inspire confidence in employers when it comes to language skills.

In this report we have examined various types of criteria, including the ways in which employers assess length of residence in Norway, the candidate’s self-assessment, place of education, the wording of the application, the importance of the job interview and calling candidates’ references as reliable sources of information about the applicant’s level of Norwegian language skills. One main finding in this part of the report is that employers consider subjective assessments to be more reliable than objective, neutral criteria. The employers included in this study primarily rely on the job interview, the applicant’s self-assessment in the application and consultation with references to assess the Norwegian language skills of candidates with an immigrant background. In other words, these subjective factors include both the employer’s own assessment and the candidate’s self-assessment. Moreover, in both our new and the pre-existing interviews with employers we can see that the way in which such signals are appraised may vary from one person to the next. Some see a fluently worded application as a sign of successful integration and that the applicant has received help from their network etc., while for others, this will be a sign of low credibility. As a result, determining what a particular signal actually indicates is not straightforward. As regards the Norwegian language test, we show that among the employers whom we have interviewed, both now and previously, many feel that the level achieved by a candidate in a language test often fails to reflect the candidate’s true Norwegian language skills. This may give rise to a type of legitimacy challenge to the test.

What is the meaning of ‘language skills’?

Why are subjective criteria and self-assessments more widely used to assess Norwegian language skills than more objective, neutral sources? One main reason, which is discussed at some length in the report, is associated with the employers’ interpretation of the term ‘language skills’. One key finding is that even though employers are concerned with language skills in the linguistic sense, i.e. as vocabulary and grammar, their understanding of ‘language’ goes beyond this. For employers, language skills are frequently associated with more social, relational and meaningful factors. These are skills that are essential to be able to fit into a working environment. Many employers highlight the importance of humour, of avoiding misunderstandings, the ability to detect moods, and awareness of norms of conduct in the customer interface. This insight is important, because it challenges the value that language tests will have as a standardised measure of a person’s language skills. In brief, the suitability of language tests as a signal largely depends on their ability to measure what employers need in order to reduce the uncertainty they feel with regard to minority job applicants.

Furthermore, we have also seen that ‘objective’ signals, such as length of residence in Norway, the language test, place of education and a grammatically correct job application, function not only as a signal of the candidate’s language skills in the linguistic sense. Such signals also influence the employer’s appraisal of other characteristics of the candidate, because employers often extrapolate from observable aspects (language test, length of residence etc.) to less observable characteristics, such as whether a candidate inspires confidence or is resourceful. For some employers, a grammatically perfect job application will be an indication of good language skills, whereas for others, it will undermine their confidence in the candidate.

Since many employers are at least as interested in information about the candidate’s ability to communicate, fit in and understand workplace norms and humour, a language test or other more ‘objective’ signals of a good linguistic command of Norwegian will not be deemed as relevant as more subjective assessments of ‘language’ in a wider sense. The Norwegian language test fails to measure these other characteristics that employers include in their understanding of ‘language’, and it should therefore not come as a surprise that it is not used as a tool to minimise the uncertainty associated with a job applicant with an immigrant background. 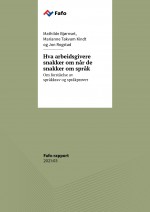