When welfare is for sale. Non-profit and commercial suppliers of welfare services

Norway has a large public sector with a broad range of welfare services for its inhabitants. In addition, for-profit and non-profit private providers play an important role in Norwegian welfare policy. Our ambition is to offer a comprehensive knowledge base for policy developments, and in this report we provide an updated overview of the literature and analyse trends, the economic effects of private provision, attitudes to the public-private mix in welfare as well as the conditions for political governance of market providers in the welfare state.

The report shows that there has been strong growth among the for-profit suppliers in all the public service types we have studied, including nursing homes, kindergartens, home care and child welfare services. At the same time, employment in non-profit and pubic provision has stagnated, remained stable or grown more slowly than for-profit employment in all the services areas that we examined. For-profit suppliers have thereby increased their market shares. Furthermore, we have explored what characterises the financial status of private providers in the care sector.

This analysis shows that there is considerable variation in profitability across various service areas. Of the services we looked at, profitability is highest in enterprises that run kindergartens, and compared to non-profit kindergartens and the other types of services, it can be characterised as super profit.

The effects of using private providers in public welfare provision are not well documented in the research literature. In particular, there is a lack of solid evidence regarding how private welfare solutions affect quality and costs. With regard to the effects on wages and working conditions and segregation, the knowledge base is more solid. Most studies show that private provision can depress wages and working conditions for employees, and in particular, that free user choice tends to increase segregation.

We have conducted surveys among local politicians and a representative sample of the population, related to their attitudes towards the use of competitive tendering and their opinions on the balance between public, non-profit and for-profit service providers. A key finding is that the population’s attitudes have changed from 2012 to 2018, becoming less positive to competitive tendering. The attitude of local politicians also appears to have become more negative.

Public authorities have the opportunity, according to the European regulation (EEA Agreement), to impose requirements on services offered, for example requirements on salary and working conditions, to exclude for-profit actors from participating in public tenders, and to regulate dividends or the like. The report points to four main political strategies used to govern the future private public interplay in welfare services: (1) only in-house public production, 2) developing a non-profit sector, 3) ensuring equal pay, work and pension conditions both for profit and non-profit actors that provides services, and 4) establishing free quasi markets. We conclude that there is a need to extend political instruments if the ambition is to secure more robust political control of the welfare markets, including necessary changes in legislation and collective agreements. 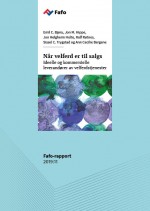