The Norwegian Labour Inspection Authority is currently engaged in efforts to strengthen knowledge about whistleblowing in Norwegian working life and how this should be handled. This is the background for this study, which gives a snapshot of the situation at the turn of the year 2018/2019. The survey has been conducted by Kantar TNS and encompasses 3955 respondents, including employees, managers with personnel responsibility, safety delegates and elected trade union representatives. The three latter groups can serve as recipients of notifications of censurable conditions, and the questions they were asked pertained to the ways in which such notifications are handled by the enterprises.

In general, there is reason to assume that enterprise managers will be highly motivated to address censurable conditions, since these have the potential to damage the enterprise’s economy, working environment and reputation, as well as the treatment of clients or customers.

Negative sanctioning of whistleblowers tends to attract a lot of public attention. In Norwegian studies, the proportion of whistleblowers who experience sanctions varies from 12 to 25 per cent. Most people will perceive a situation involving notification of censurable conditions as uncomfortable under any circumstances. Research has also shown that it is more risky to submit such a notification when the boss is responsible for the censurable issue, and in enterprises without whistleblowing procedures (Skivenes & Trygstad 2015; Trygstad & Ødegård 2016).

Further legal amendments are currently being considered in the wake of the report from the public commission on whistleblowing (NOU 2018:6). In addition, the legal provisions must be interpreted within a local context in each workplace. This requires employees and managers to be familiar with the provisions and have a deliberate approach to their practical application.

A total of 43 per cent report that the requirements in the Working Environment Act were the main reason for establishing whistleblowing procedures in their enterprise. Approximately the same proportion report that concerns for appropriate enterprise management were the key reason for preparing such procedures.

In the survey, we use concepts and definitions used in other Norwegian and international studies. The concepts are intended as operationalisations of the provisions on whistleblowing in the Working Environment Act. Use of the same concepts helps facilitate comparisons of findings from different studies over time, provided that the surveys target the same samples. In the studies that we have undertaken over the last eight years (Fafo 2010–Fafo 2018/2019) we have asked the employees the following question:

Those who answered ‘yes’ to this question were presented with 17 examples of possible censurable conditions and an ‘other’ category (that could be specified in free text).

Sixteen per cent had witnessed, uncovered or experienced censurable conditions that ought to have been halted in their workplace, and a little more than five out of ten had submitted a notification to this effect (notification activity). The most important reason for refraining from blowing the whistle is fear of the consequences. ‘Destructive management practices that harm the working environment’ was the most frequent cause for notifications. Nearly seven out of ten report that a manager was responsible for the censurable condition.

Positive and negative reactions to whistleblowing

Four out of ten report that the notification helped rectify the issue (whistleblowing effectiveness). Psychosocial issues are the most difficult conditions to report. It is also perceived to be more challenging when the person responsible for the censurable issue occupies a high-ranking position in the enterprise.

Nineteen per cent have experienced negative reactions/sanctions because of whistleblowing. Being stripped of responsibilities or reproached by a superior are the most common forms. One in five report that their career opportunities suffered. However, 33 per cent of the whistleblowers were met with positive reactions.

Seven out of ten whistleblowers answer that they would have notified again. Those who were met with negative reactions/sanctions were less inclined to submit another notification.

The majority of the whistleblowers believe that the action taken against the person responsible for the wrongdoing was inadequate in relation to the seriousness of the censurable issue.

Development over the last decade

The table below presents an overview of the results from a number of surveys, including the present one (Fafo 2018):

Table: Key findings from studies undertaken in the period 2006–2018. Per cent.

* The share of 12 per cent is of the total sample, that is, all employees as a whole. It is not the share of employees that have experienced censurable conditions/wrongdoing.

In terms of whistleblowing effectiveness, negative reactions/sanctions and questions about willingness to blow the whistle again there is a negative trend over the period. Various circumstances may help explain this trend, which most likely is due to a combination of factors.

First, the whistleblowing provisions may not be well enough known in Norwegian enterprises, even though 70 per cent of the respondents report to be fully or partly familiar with them. Those who are unfamiliar with the provisions will also be unaware of the right of employees to report censurable conditions and that sanctions against employees who submit such notifications in an appropriate manner are illegal.

Second, even if the employees, safety delegates, trade union representatives and managers are aware of the provisions, it is by no means certain that the handling of notifications and whistleblowers has been discussed at the workplace. Such discussions would include ways to ensure that both the whistleblower and the person identified as responsible for the wrongdoing are treated fairly and in accordance with the regulations. Nor can we be certain that the benefits of whistleblowing, such as combatting corruption and preventing harmful working environment issues or untenable treatment of clients/customers, have been sufficiently elucidated in such discussions.

Third, there is a possibility that issues brought to light by whistleblowers nowadays are of a more serious nature than in 2010. It is not unreasonable to assume that the discussions around censurable conditions and whistleblowing have raised the threshold for characterising an issue as censurable. Consequently, the issues may be of a more serious nature than before, in the sense that calling attention to them might harm the reputation of the management and the enterprise. The whistleblower may meet resistance because he or she challenges powerful leaders.

Fourth, it might be that the climate and conditions for voicing criticism in Norwegian working life are poorer in 2018 than they were in 2010.

A large responsibility rests on those who receive and process notifications, and managers have a special responsibility in this respect. In most enterprises, however, trade union representatives and safety delegates will also be important recipients. The majority of Norwegian employees submit notifications to these groups first, which is in accordance with what is referred to as ‘appropriate notification procedures’.

Seventeen per cent of all notification recipients have received a notification during the last year, and seven out of ten report that they dealt with the matter. Eight out of ten handled the case in line with the notification procedures (among those who have such routines in their workplace), and the majority shared the employee’s concern about the matter at hand. The vast majority of notification recipients believe that whistleblowing provides an opportunity to rectify errors in the enterprise. Six out of ten respond that whistleblowing cases are challenging because it is often one person’s word against another’s. Moreover, 24 per cent of the respondents believe that the whistleblowing provisions have made it easier to put forward groundless accusations.

Eight out of ten report that the case was handled confidentially and that the person accused was given the opportunity to provide his or her version of the issue. Less than half of all notification recipients had questioned the impartiality of those charged with processing the case, and four out of ten did not investigate what happened to the whistleblower.

The role of the Labour Inspection Authority and indicators

The guidance provided by and the role played by the Labour Inspection Authority in cases involving whistleblowing form a key part of this report. We have drawn up a list of indicators that can be used to measure trends in the years to come. For example, they can assess employees’ knowledge of how to notify public authorities, the role of the Labour Inspection Authority in cases involving whistleblowing and the utility of the guidance that the inspectorate provides.
The key indication of a positive trend would be that whistleblowing activity increases, that the use of sanctions is strongly curtailed, and that the proportion of those who report to be willing to blow the whistle again increases (see the table above). In addition, the following factors can be measured: 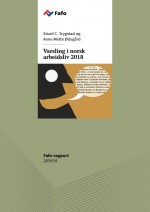