In recent years a great deal of published literature has documented the differences prevailing between Norwegian and foreign workers in terms of their wage levels, working conditions and affiliation with the labour market. In some cases, labour migrants work under very poor, occasionally illegal conditions. Some studies have investigated living conditions among labour migrants, but alcohol abuse in this group has not been documented to any appreciable extent. Further studies might help us understand how the organisation of working life, including absence of regulation and control, gives rise to risk factors for poor health, unsatisfactory integration and alcohol abuse.

Based on interviews with representatives of the health services, organisations, employers and trade unions and in-depth interviews with labour migrants, the report points out some causes of alcohol abuse among Polish labour migrants. The study is not representative, and we are thus unable to identify the relative importance of the various factors. Our findings may nevertheless provide an overview of the risk factors that are highlighted by the key stakeholders. These risk factors may have their origin in the labour market or else be of a social nature.

The organisation of work, employment and responsibilities among enterprises in the construction industry provides foreign workers with a weaker affiliation with the labour market than a permanent position in a Norwegian construction enterprise would ensure.

The extensive use of temporary employment and manpower suppliers makes for a greater degree of uncertainty in the labour market. Being reported as having problems with alcohol may cause workers to lose their job.

The use of sub-contractors transfers the responsibility for handling substance abuse to smaller (and occasionally unscrupulous) enterprises that have limited resources to assist their workers.

Temporary employment and short work assignments may result in periods with no work or income.

Polish craftsmen rarely have Norwegian approval of their professional training and are forced to accept lower paid jobs, which may engender a sense of exclusion and low self-esteem.

Living in temporary construction site accommodation may result in a monotonous life with few opportunities for meaningful leisure activities.

Lack of Norwegian language skills may partly lead to marginalisation and problems in finding relevant work, and partly to problems in establishing a social network in Norway.

Language problems may also be a barrier to obtaining proper help for health problems and subsequent follow-up and support.

Many Polish workers in Norway have no network of family and friends. This means that alcohol problems will be less likely to be detected and addressed by a trusted person.

Missing one’s spouse or children could in itself be a burden on mental health and increase risk.

Drinking culture may be a risk factor, although there is no certain correlation between drinking culture and alcohol consumption among Polish workers in Norway.

The availability of alcohol is likely to be of major importance. The access to illegally imported alcohol is reported to be considerable among Polish workers in Norway, and prices are low.

A number of agencies are responsible for assisting workers who have a substance abuse problem or providing voluntary assistance to labour migrants in Norway. None of these services directly target foreign workers who abuse alcohol, but many of them have geared their activities to include these groups.

In the labour market, the employer is the main stakeholder, with responsibility to assist employees with drinking problems through the Akan programme or other resources that are made available. The Akan programme, whose objective is to combat alcohol and other substance abuse in working life, points out challenges associated with language skills in workplaces that have a large proportion of foreign labour. The Akan programme has therefore produced information material in Polish. Trade unions also occasionally observe substance abuse among labour migrants and provide assistance in some cases. At the national level, the trade unions have collaborated with the authorities to combat social dumping and prevent the emergence of conditions that might be conducive to alcohol abuse, among other things.

The Oslo Drug and Alcohol Competence Centre, Alcoholics Anonymous and Blue Cross are some of the organisations that help provide assistance to substance abusers. The Oslo Drug and Alcohol Competence Centre has been informed that substance abuse problems among Polish workers have increased in pace with rising immigration. Alcoholics Anonymous provides an active network for self-help measures and maintains a number of groups with Polish members in Norway. Blue Cross primarily establishes contact with labour migrants who have dropped out of the labour market, and a reasonable number of Polish migrants have received assistance from Blue Cross.

The primary and specialist health services are key to ensuring the health of labour migrants in Norway. These services are obligated to provide options for those who seek assistance for a substance abuse problem. However, foreign workers are not entitled to a contract GP, and systematic follow-up may thus be more complicated for them than for Norwegian workers. Insufficient language skills may also constitute a barrier that prevents Polish workers from receiving appropriate treatment from the health services. 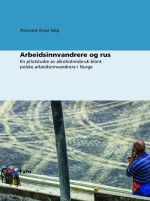