The topic of this report is parenting and social control, with a particular focus on immigrant families from Pakistan, Somalia and Sri Lanka. The empirical analyses fall into three parts:

Based on the adolescents’ assessments of their parents’ attitudes, we find that the parental generation from countries such as Pakistan, Somalia and Sri Lanka, as well as other immigrant groups from the global South, are far more conservative in issues concerning pre-marital sex, homosexuality and letting adolescents in upper secondary school age have boy-/girlfriends, when compared to the population in general. Attitudes to gender roles and sexuality are closely linked to religion—both the degree of religiosity and affiliation with specific religious communities have an effect. Muslim immigrants appear to be the most conservative, but other religious groups are also far more conservative in such issues than the general population. We also find major variations in attitudes between different groups among adolescents, but the young people tend to see themselves as considerably more liberal than their parents.

A substantial minority within some immigrant groups reports what may be referred to as severe parental restrictions on their social life. For example, 29 per cent of all girls from a Pakistani background in the first year of upper secondary school in Oslo and Akershus report that it is very or fairly true that their parents object to them ‘being in the company of persons of the opposite gender in their leisure time with no adults present’. The degree of parental control is directly linked to the parents’ cultural orientation and degree of religious conviction. The more concerned the parents are to preserve the culture of their country of origin, the stronger the likelihood that the adolescents will be exposed to strict parental control. There is also a certain correlation with the parents’ socioeconomic status, but this effect is far weaker. Adolescents who receive good grades in school, however, tend to report fewer parental restrictions than peers with poorer school performance.

Boys and girls tend to experience somewhat different forms of social control. While boys in fact more often report restrictions on being with friends, girls more frequently report that their parents object to them being with someone of the opposite gender without adult supervision. Among Muslims, girls report more parental restrictions than boys, whereas the opposite is the case in some other groups. We may assume that some boys have greater expectations regarding their own freedom and thus have a lower threshold for reporting parental restrictions. In addition, the qualitative interviews indicate that even though boys and girls may be subject to equally strict rules, violations made by girls are seen as far more serious.

The analyses indicate that parental restrictions have considerable consequences for the lives of young people. Reports of parental restrictions are associated with lower rates of participation in organised leisure activities and a higher likelihood of reporting mental afflictions and low self-esteem. Some young people appear to lead what may be termed ‘double lives’ in conflict with their parents’ wishes. For example, a considerable proportion of minority youths have a boy-/girlfriend, even though they believe that their parents would strongly disapprove of this.

Parental perspectives on raising adolescents in a foreign culture

In the second section of the empirical analyses we have attempted to give a voice to the generation of parents among immigrants from Pakistan, Somalia and Sri Lanka and their concerns linked to being a parent in Norway. We place special emphasis on older and relatively conservative parents, since they clearly articulate topics that to a greater or lesser extent are of concern for others as well.

Many of the parents whom we interviewed report missing a larger social collective from which to seek support in raising children, and often feeling alone with the responsibility for the children. In their countries of origin, raising children tends to be more of a communal responsibility that involves the extended family, relatives and the local community, and where key norms are shared in all the different arenas that the children frequent. The loss of this community, the feeling of dissolution of family bonds and of being alone when facing a strange and foreign world were among the recurring topics in interviews with the parents. Some also express frustration over the fact that the children, in their opinion, fail to uphold the community norms that prevailed in their own youth.

Individualism—often interpreted as egotism—and liberal attitudes to substance use and sexuality are perceived as especially threatening aspects of Norwegian society. In addition, some parents see that their traditional instruments for maintaining discipline and control, including corporal punishment, shared religious norms and support from the extended family, are unavailable here. Some therefore feel that they are unable to adequately exercise parental and social control. Some are also uncertain of what is considered acceptable in terms of setting boundaries for children in Norwegian society.

Some parents feel that their religion, identity and culture are under pressure from the wider society. To some extent, this is a reflection of uncertainty and fear in the encounter with the unknown. However, this perception also reflects a real conflict between different ways of regulating social life: Should adolescents be regarded as citizens with independent rights and autonomy, or are their rights and duties primarily derived from their membership in a family collective with sovereign authority over its members?

This conflict between a collectivist and religious family organisation on the one hand and secular-state individualism on the other is partly expressed in the form of an ambivalent relationship toward schools. Immigrant parents tend to have strongly positive attitudes to school and education, but in matters related to swimming lessons for boys and girls, summer camps, showering after PE classes etc. some parents feel that their wishes are being ignored. The state/family conflict emerges with particular clarity in the form of families’ fear of the child protection service, which some parents see as a constant threat and an invasion of the family’s sovereignty.

The maintenance of traditional marriage institutions is perceived by many as the key to perpetuating family structure, faith and identity, and concern for the children’s future marriage is a main factor in the execution of social control. In the background lurks the fear of being sent to a nursing home, which for some is a symbol of the consequences should they fail to preserve traditional family structures. For some parents, there is thus a lot at stake in their parenting practices.

There are major individual variations between different families and parents in all three groups with regard to the strength of these concerns. However, there are also systematic differences between the groups that are worth noting. The first difference concerns the ‘glue’ in the social networks that binds them together. Although the Pakistani, Somali and Tamil informants were all concerned with family dissolution as a result of migration, there were considerable differences with regard to their concrete social organisation. The Somali group stood out at one end of the scale, by having largely fragmented social networks and many families with dissolved family structures. As many as 6 out of 10 adolescents with a Somali background reported that they did not live with both parents together. The Tamil group with a background from Sri Lanka stood out at the other end, by having largely succeeded in reconstructing closely knit social networks that provide considerable support for individual families, organised within the framework of the Tamil diaspora movement. The second difference pertains to the perception of identity conflict. Some of the parents in both the Somali and Pakistani groups felt that, to some extent, their wish to perpetuate their cultural and religious identity conflicted with the intentions of the Norwegian state regarding their children. The Tamils were also concerned with preserving their own identity, but for them, this was a matter of language, rather than religion, and they far less frequently stated that this was antagonistic to their integration in the wider society.

The interviews with adolescents and young adults underscore the social complexity in relationships characterised by strong social control. Adolescents and parents are both part of networks and relationships in which many of the participants experience mutually incompatible demands and expectations—not only to their own lifestyle, but also in terms of how they should relate to that of others. It is thus not always so easy to identify those who exercise social control and those who are being controlled, since there are many—including parents, siblings and other relatives—who may feel that they are caught ‘between a rock and a hard place’, squeezed between the expectations of others.

The way in which adolescents perceive being subject to strong social control will largely depend on their own attitudes and adaptations. For example, internalising the family’s expectations is one way to ensure avoidance of conflicts while being able to perceive autonomy and independence in daily life. Others choose to embrace a religious identity as a way to distance themselves from the family’s demands, while committing to a set of life rules that ensure acceptance and legitimacy. Some enter into conflict, in the form of breaking out and settling scores or fighting small everyday battles. Many live so-called ‘double lives’, shifting between varying expectations and demands in different arenas. However, one effect of such ‘double lives’ is that relationships become potentially vulnerable—the consequences are felt only when something ‘goes wrong’.

Inter-generational conflicts in relationships characterised by strong social control cannot be understood only as value conflicts; they also take the form of negotiations, where various resources can be brought into the bargain. For many young people, however, conflicts of interest between different generations appear as internalised value conflicts, such as the parents’ concern regarding who will take care of them in their old age.

We identify a number of social mechanisms that, over time, will bring about change in the direction of more liberal parenting practices. These are partly changes that follow from learning and adaptation, and partly changes that follow from conflicts. Over time, many families feel that their points of reference gradually change and the idealised images of the perfect family have a tendency to pale. In some communities, their notion of ‘scandal’ erodes, and the fear of what others might say loses some of its hold as time passes. Furthermore, many parents discover through trial and error that traditional authoritarian parenting styles function poorly in Norway. Many report that they have been ‘forced’ to change their methods in seeking to transfer their values to the children. In addition, we can see that the institutional frameworks in Norwegian society—which provide women and children with far better legal protection and access to resources—help give small and large internal family conflicts a different outcome than what would have been seen in the countries of origin. Increasing levels of education, especially among girls in the second generation, also help change the balance of power and the bargaining situation in ways that gradually change the rules of the game in the families.

Religion plays an ambiguous role in these processes of change. Religion is the source of demands and restrictions related to gender segregation and chastity, and religious arguments lend weight and legitimacy to the execution of social control, with a conservative effect. At the same time, we can see that changes in family practices are accompanied by a more liberal and individualist interpretation of religion in the younger generation. For some, religiously based arguments may even provide a weighty case for liberation from the more culturally based expectations from the parents’ generation.

The report is concluded with some reflections around the implications for policy-oriented work in this area. 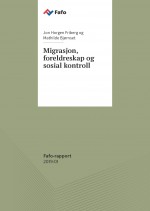