Recruitment and organising efforts in the service sector

This report investigates the recruitment and organising efforts of the Norwegian Confederation of Trade Unions (LO) and its affiliated unions in selected industries in the service sector, namely hotels and restaurants, retail, transport, security services and cleaning. Below-average trade union density and challenges concerning wages and working conditions pose a challenge for trade union organising in these industries.

The Fafo-note «Employees and trade union density in the service sector», written in parallel with this report and as part of the same project, describes the private service sector in numbers, both as a whole and as separate industries. We show that the Norwegian private service sector as a whole, as well as the selected industries, is marked by a lower trade union density than the rest of the Norwegian working life. We find around 328 000 unorganized employees in retail and wholesale, hotels and restaurants, private transport, security services and cleaning (the selected «service industries»)[1].  Many of these employees have occupations in which LO affiliated unions are dominant. In the selected industries the trade union density is highest in security services (about 50 percent) and private transport (about 40 percent). The trade union density in cleaning services is above 30 percent, while retail and wholesale as well as hotels and restaurants display the lowers density rates. Here, just over 20 percent of workers are unionized.

Mathematically, the potential to organize additional employees in the service industries is substantial. At the same time, the share of unorganized employees is correlated with the size and type of companies present in an industry and the demographics of the employees. From previous research, we know that the following groups of workers are statistically less likely to be unionized that others:

Although the selected industries differ in some important aspects, we find several common traits that are of importance to the organizing efforts, in terms of business structure and employee demographics.

In chapter 2, we look into the LO affiliated unions own assessment of the selected industries and how the trade unions experience and respond to these structural challenges, based on interviews with trade union representatives. Foreign workers, young workers, students, temporary and/or part-time employees and workers in small workplaces are groups which the trade union representatives we interviewed describe as challenging or particularly difficult to organize, or as demanding a different approach to recruiting.

Young workers who combine studies and part time work are prevalent in the service industries. A challenge in terms of organizing is that this group of workers often envision only short-term employment in the industry before moving on to other sectors. A large share of foreign workers is found especially in hotels and restaurants, cleaning and parts of private transport. The LO unions have been quite successful in organizing foreign workers in these industries, though challenges related to language and cultural differences are reported.

The trade union representatives view small workplaces to be most challenging to organize. In some cases there is active resistance from employers not wanting shop stewards or a collective agreement. A well-functioning trade union organization, which is crucial to long-term membership growth, is also more difficult to sustain.

Resources and innovation in recruitment

The challenges related to the falling trade union density and the growth of the service sector in many industrialized economies have been met with sometimes substantial changes in trade union strategies. The resource intensive «organizing model» with an emphasis on campaigns, workplace engagement and capacity building, confrontation and a professionalization of the recruitment effort, has been adopted in various forms in most western countries. This model has had some influence in Sweden and Denmark, albeit far less in Norway. The Norwegian labor movement nevertheless see a need to innovate its recruitment practices and allocate additional resources to this effort.

In chapter 3, we investigate how the LO affiliated unions organize and prioritize their recruitment and organizing efforts. Central dimensions are the division of labor and responsibilities within the organizations, to what extent the organizing efforts are structured by plans or grand strategies, how the effort is directed and what goals are set. Norwegian trade unions have traditionally based their organizations on a generalist model, where responsibility for recruitment and organizing largely rest at workplace level and as one of many work tasks for shop stewards.  This model is flexible and attentive to local needs and variations, but suffers the risk that recruitment efforts may be postponed by shop stewards with more pressing daily concerns. The model also leaves less potential for central coordination and strategy.

The local organizing efforts can be supported in various ways, e.g. through strategies, merchandise or monetary support to local unions. Larger unions often employ organizational workers who have recruitment and organizing as one of their main work tasks. At central level, some of the LO unions have also renewed their recruitment efforts by organizing campaigns and using new methods such as social media and geotagging. The overall impression is nevertheless that the Norwegian unions have made less changes in their organizing efforts in comparison to their Swedish and Danish counterparts.

The clearest example of innovation and increased effort in recruitment in the service sector is LOs 2016-2019 service project, which is an extraordinary and long-term campaign coordinated and ran by LO in cooperation with affiliated unions, aimed at increasing membership numbers and collective agreements. Seven projects secretaries have been hired to run the campaign, which has yielded promising results.

In the interviews, trade union representatives were asked to reflect around what factors created success in their organizing efforts. The most frequently emphasized factors include face to face contact and the need to quickly approach new employees, but also the importance of more long-term strategies to develop a culture for unionization and to create a self-sustaining trade union organization at the workplace. The most efficient solution is claimed to be when recruitment can left almost exclusively to shop stewards at workplace level, as part of their everyday tasks. To recruit the right shop stewards is thus key.

Several of the LO affiliated unions conduct campaigns, often aimed at specific subsectors or to engage the entire organization for a shorter period of time. Union representatives claim that such campaigns have yielded good results, but they are often limited to a few weeks a year or to a small segment of employees.

LOs service project is an example of how LO and its unions work together to strengthen and develop their recruitment practices. The project represents an innovative approach and the unions have been challenged to find new methods and target groups for organizing, with promising results. Key takeaways from the project is that this type of project based campaigns work well, that it is possible to organize “difficult” groups and workplaces such as malls, and that cooperation and dialogue with the employers tend to yield results also in the service sector. Cross-union cooperation and comprehensive schooling of shop stewards have been key.

Some informants emphasize that recruitment often is about awakening interest in potential members and explaining what the labor movement stands for and have achieved. However, membership is rarely driven solely by political or ideological reasons. Individual membership benefits and the promise of better collective bargaining power and thus higher wages and influence at the workplace, is elemental.

Retention of current members can be an effective way to increase membership numbers over time. To follow up members who have not paid their membership fees can be efficient and cost effective, but how systematically this task is approach varies between the unions. The Norwegian Union of Commerce and Office Employees (HK) reports good results from centralizing and systematizing this task.

The project included interviews with Swedish and Danish unions organizing service sector workers, presented in chapter 4. In Sweden and Denmark trade union density rates are higher than in Norway, but has also fallen faster over the past decade, and LO unions, especially in Denmark, have experienced increased competition. Partly in response to this development, the unions we interviewed have to a larger extent than their Norwegian counterparts chosen to allocate additional resources to organizing efforts and adopted new methods associated with the organizing model.

The interviewed LO affiliated unions in Denmark and Sweden employ a more specialized model in which professional organizers and campaigns following the principles of the organizing model play a larger role. Danish 3F, HK Handel and the Swedish Transportarbetareförbundet have all hired full-time organizers who work with targeted organizing campaigns coordinated at the central level. Organizers are usually employed by the central unions or partly funded by central grants, and work more or less exclusively with recruitment and organizing and receive comprehensive schooling in organizing methods. Compared to the Norwegian unions, their Swedish and Danish counterparts appear to employ more centralized and structured organizing strategies, which are also more resource intensive and committing. Key takeaways from their experiences include that these method can yield substantial membership growth, albeit at the cost of significant additional resources, but also that it is crucial to adapt the organizing model to the national and industry-specific context. 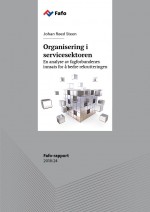