Temporary hiring in the construction industry in Trondheim

Results from a mapping study conducted in the autumn of 2018.

This report describes the use of employees from temporary work agencies in the construction industry in Trondheim. The data are drawn from a mapping study conducted at construction sites in November 2018 by five local trade unions in the Norwegian United Federation of Trade Unions (Fellesforbundet) and the Electricians and IT Workers Union (EL og IT Forbundet). Union representatives visited the construction sites to identify enterprises that had employees on the site and to determine whether these workers were hired from a temporary work agency or directly employed by a main contractor or subcontractor.

The mapping shows that approximately 18 per cent of the employees were temporarily hired from another enterprise, and 12 per cent were agency workers. The remainder 6 per cent were temporarily hired from another construction enterprise.* The proportion of temporary agency workers was highest in carpentry and concrete works. The proportion of temporary agency workers on construction sites in Trondheim is lower than in the Oslo area, but much higher than in the labour market as a whole.

Norwegian legislation includes provisions that restrict the enterprises’ opportunities to hire workers from temporary work agencies. The hiring enterprise may, however, enter into a written agreement with trade union representatives that expands the opportunity to hire temporary workers. The study shows that such agreements are frequently absent, even when the nature of the hiring relationship indicates that the hiring enterprise should have signed such an agree­ment. The study also shows that many of the employees who are hired through temporary work agencies are unskilled workers.

* Hiring of employees from undertakings other than those whose object is to hire out labour ((Working Environment Act: Section 14-13). 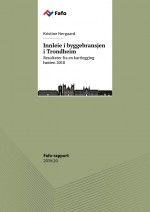