The gender-segregated labour market at the workplace level

The Norwegian labour market is clearly segregated by gender. Although women and men have approximately identical rates of labour force participation, they work in different professions, industries and sectors. We have some knowledge about the gender-segregated labour market at an aggregated, national level. We know less about what it is that maintains the gender distinctions at the workplace level, and what may help change this situation.

In this report, we focus on the level of the workplace. We investigate workplaces in four industries that, to different degrees, are gender-segregated: retail, transport, nursing homes and kindergartens. Women predominate in kindergartens and nurs-ing homes, men are in the majority in transport, while the proportions of men and women are approximately equal in retail. We have conducted qualitative interviews with managers, trade union representatives and employees in twelve workplaces.

We find that both structural and cultural factors are important to understand why the labour market remains gender-segregated. Young women and men continue to make gender-typical choices of education. This is especially evident in vocational training. Girls choose healthcare-related training, while boys choose training for traditional trades such as plumber, electrician and construction worker. A more marked shift has occurred in higher education, and women are now in the majority in previously male-dominated disciplines such as medicine, psychology, law and finance. Men have to a lesser extent opted for female-dominated education pro-grammes. This is most likely linked to status and pay, meaning that it is more ra-tional and attractive for women to make untraditional choices than it is for men.

Working time is another key factor. We know that women work part-time to a greater extent than men, and that female-dominated professions tend to provide part-time work as an option more frequently than male-dominated ones. Women tend to adapt their working time to the family’s needs, and it is assumed that the public sector and professions that make provisions for part-time work ’attract’ wom-en. In our study, the bus drivers in particular work non-family friendly hours. The male bus drivers are concerned about this, and claim that this is an occupation which is best suited to those who no longer have small children.

One main finding in this study is that all of the informants believe that having a gender-integrated working environment is an advantage in itself. Our informants underscore that having both women and men as colleagues helps change the at-mosphere in the workplace and contributes to a better working environment for all. In the kindergartens and nursing homes, they are also convinced that having both men and women as staff members helps improve the quality of the services. There is a perception that men and women have different qualities that complement each other, and that this benefits the children in the kindergartens and the patients in the nursing homes.

On the other hand, we find that gender quickly becomes irrelevant in recruiting processes; a person’s qualifications, experience and personal suitability are consid-ered more important than gender. In this situation, employers are searching for the right person, someone who has the right qualifications and will fit into the work environment. This focus on the ability to fit into the working environment may cause employers to search for someone who resembles those who are already there. This may apply to both external characteristics and demeanour, and in combination an already gender-segregated pool of applicants, this may perpetuate gender segre-gation in the labour market.

In contrast to this, we find that when we ask the informants to describe the ideal bus driver, kindergarten teacher, care worker or retail assistant, a person’s gender is deemed irrelevant. In other words, it seems that both women and men may be suit-able for most jobs, but perhaps less easily be able to fit into all working environ-ments.

Moreover, the study shows that although our informants believe that a gender-integrated work environment is a good thing and that men and women complement each other in the workplace, there is a tendency at the individual level to resist be-ing concerned with gender. When it comes to recruitment, it is more legitimate to address gender topics at the group level, but not at the individual level. It may seem that employers need strategies for applying the idea of gender balance at the group level in specific individual hiring processes, without this being perceived as a disa-vowal of the other qualifications of the individual in question. 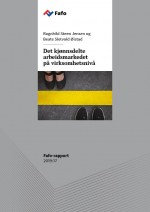