Violations of the regulations pertaining to fixed-term employment and temporary agency work. Sub-report

4 Fixed-term employment in the Labour Force Survey
In this chapter we investigate the characteristics of fixed-term employment in the sense of whether features of the employment relationship indicate that the employ-ment should fall under the provision on exemptions in Section 14-9 (1) of the Work-ing Environment Act. We have done so with the aid of questionnaires, and conse-quently this involves no assessment of legality.
• Thirty-eight per cent of workers on fixed-term contracts report that they are in a training position (16 per cent) or substituting for someone who is absent (22 per cent). These are reasons that would mainly qualify for exemption from permanent employment as stipulated by the Act.
• It is more complicated, however, to construct indicators showing that the work is of a temporary nature. We have included characteristics to determine whether the work is time-limited or that the workers possess skills that differ from those found in the enterprise in general, or whether the work in question is linked to a peak in production. Depending on whether strict or more lenient criteria are applied, the proportion that falls under this category varies from 22 to 35 per cent.
• The proportion of workers on fixed-term contracts who cannot be categorised un-der any of the reasons outlined above varies from 27 per cent (lenient classifica-tion) to 40 per cent (strict classification).
• The group that cannot be classified is reduced somewhat if we remove those who report to be hired on a temporary basis under the provision for fixed-term employ-ment for up to twelve months on a general basis. The proportion that cannot be classified into any category (up to and including litera f) varies from 23 per cent (lenient coding) to 35 per cent (strict coding).
• If we assume that from 23 to 35 per cent of the temporary employment relation-ships have no clear legal basis, this will involve from 40 000 to 65 000 people in the private sector, the municipal sector and the health enterprises.
• There are clear differences between industries in terms of the reasons given for hiring on a temporary basis, but there are no significant differences in the number of workers with such contracts who cannot be classified under any of our indica-tors.
• The vast majority of the workers on fixed-term contracts have less than two years’ seniority with their employer. Sixteen per cent report to have been continuously employed for three years or more. The questions are insufficiently specific to per-mit any conclusions as to whether this constitutes continuous employment in the sense of the Working Environment Act.

5 Analysis of data from enterprise surveys
In this chapter we investigate the arguments that employers use to justify their prac-tices related to fixed-term contracts and temporary agency work. These data cannot provide any estimates of the number of violations, in the sense of the number of workers who are in an employment relationship with questionable contractual terms. The data primarily provide a picture of the frequency with which employers engage in this type of hiring from motives that lie outside or in the grey zone of the regula-tions, and when it comes to agency work, whether agreements for extended use are established.

Temporary agency work
• Thirty per cent of the enterprises have hired workers from temporary work agen-cies during the last twelve months, and for 21 per cent of them, this is one of the two most important solutions to staffing problems.
• From 10 to 13 per cent report to use temporary agency workers to fulfil needs/func-tions that are in the grey zone or outside the scope of the Working Environment Act. It is noteworthy that the temporary agency workers are part of the ongoing operations. Hardly anyone refers to this reason exclusively.
• One in four enterprises that use agency workers report that an agreement to this effect is entered into with trade union representatives. Agreements are far more common in private manufacturing than in the public sector and private service in-dustries.

Temporary agency workers from Eastern Europe
• The employment of Eastern European workers, including agency workers, have been identified through a separate study among enterprises in the construction industry, parts of the manufacturing sector and the hotel and catering industry. Here we find that from 3 to 6 per cent of the enterprises are using such workers as part of their daily operations, without any waiver agreement. This is an indication that agency workers are hired in ways that contravene the regulations.

7 Analyses based on data from enforcement agencies
• Our informants have the impression that few cases end up in the courts.
• Most of the cases are solved through dialogue, often at the workplace between the employers and employees, but dialogue is also characteristic at higher levels.
• The parties indicate that dialogue is the preferred form, but it was also pointed out that the small number of cases that are taken to court may have an unfortunate signalling effect, and imply that no boundaries are drawn up and tested.
• Our informants indicate that they are receiving far more requests for advice and guidance, which also may explain the small number of cases taken to the courts.
• The general picture indicated by the experience of key informants is that the num-ber of formal cases and inquiries has remained fairly stable over time, but they also note that the greater clarity and awareness seen in recent years have had a positive effect.
• According to our informants, the great majority of the cases are linked to the rules on extended work, the three/four-year rule and the volume of basic staffing, and when it comes to temporary agency work, the written agreement that can be es-tablished with the trade union representatives.
• Based on our informants’ experience, it may seem as though cases pertaining to fixed-term contracts are most prevalent in the public sector, in our case in the mu-nicipalities, while cases associated with illegal temporary agency work are most prevalent in the private sector, primarily in the construction and manufacturing industries.
• Our informants in the trade unions and employers’ associations emphasised that their opinions were valid only for the unionised parts of working life; the legal ad-visors in the trade unions assumed that they could see only ‘the tip of the iceberg’ and that there could be a number of unrecorded cases in Norwegian working life as a whole. Combined with the experience of JussBuss, this gives grounds to as-sume that there are groups that are especially vulnerable. 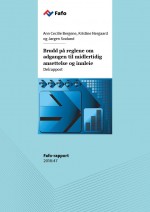