Work intensity and pressure among radiographers

The purpose of this report is to examine work intensity and pressure among radiographers and whether these are perceived to have increased in recent years. The following research questions were formulated:

We focus on three specific factors or trends that are assumed to impact on radiographers’ experiences in their daily work: new technology, patient pathways for cancer and other diagnoses, and changes in patient composition.

The empirical basis consists of the following: qualitative interviews with a total of 12 radiographers, 8 of whom are affiliated with two different health trusts/hospitals and 4 are affiliated with private institutes/clinics; a survey of currently employed members of the Norwegian Society of Radiographers, with 1038 responses received (37% response rate); and collective wage agreements and special agreements from 24 health trusts/hospitals and private institutes/clinics over a period of about 10 years – a total of just over 200 documents.

This summary is based on the chapter summaries in the report.

Chapter 2 provides a brief presentation of the theoretical framework for understanding work intensity and pressure. The main elements are as follows:

This chapter examines how the work is organised and the framework this creates for perceived work intensity. The main findings are as follows:

Chapter 4 How busy are the radiographers?

In this chapter, we move on to the factors that form the core of radiographers’ perceptions of work intensity, and the issue of how busy they are. The main findings are as follows:

This chapter takes a closer look at the impact of new technology, pathways for new patient groups and the increasing frequency of medical imaging. The findings are as follows:

In this chapter, we review the new competence requirements for radiographers and the type of skills development measures they have made use of. The findings are as follows:

In this chapter, we collate the various findings and discuss whether perceptions of work intensity have changed in recent years in light of the trends described in earlier chapters. This chapter shows that:

2. The work of radiographers has become more stressful (77 per cent strongly/somewhat agree)

3. New technology has increased the pace of work (75 per cent strongly/somewhat agree)

4. There is less time to quality assure own work (68 per cent strongly/somewhat agree)

5. The competence requirements for radiographers are more stringent than previously (66 per cent strongly/somewhat agree)

5. New patient groups have made the working day more of a challenge (66 per cent strongly/somewhat agree)

Internal time pressure is the work intensity that stems from the content of the daily work. It is related to the qualitative aspects of the working hours and subjective perceptions of how busy or intense the working day is. Here, we point to several factors or trends that have led to many radiographers experiencing higher work intensity and pressure in their daily work. A key finding is that new technology seems to have resulted in a larger part of the working day being filled with tasks – i.e. the time between tasks has been reduced. The new technology has increased the pressure on time margins for imaging; what takes most time now is the human aspects and patient care. It is also in this area that radiographers often find that the challenges are greatest and that the working day has become more mentally challenging than it used to be. 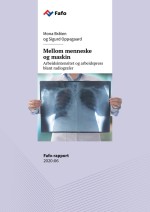