This report presents the main findings of a household survey conducted in the Jordanian governorates of Amman, Irbid and Mafraq between February and March 2014, aimed at assessing the implications of the large influx of Syrian Refugees onto the labour market in the three geographical areas. The results are based on information gathered on the current labour market situation, as well as some of the changes that have occurred since the beginning of the Syrian Refugee influx into Jordan in March 2011. 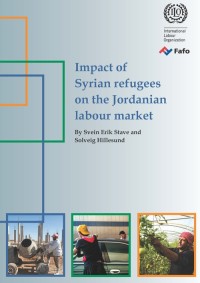