Web edition How can one establish reliable and relevant indicators that make it possible to carry out comprehensive and meaningful analyses of living conditions across countries? How can one ensure that cultural and institutional particularities of individual countries are interpreted in a sensible manner?

A research seminar with the title «Comparative Baltic-Nordic Living Conditions Research» was held at Fafo Institute of Applied Social Science in December 1996. The aim of the seminar was to discuss the methodological and conceptual challenges involved in comparative living conditions research. The cases under analysis were the Baltic countries, where a major living conditions project called NORBALT had been carried out in 1994 – a project possessing great potential for comparative analyses.

The present report is a compilation of articles written by Nordic and Baltic scholars based on presentations from the Fafo seminar. The articles examine various aspects of comparative living conditions research, and offer several examples of comparative analyses based on the NORBALT and other complementary data sets. Moreover, the report sketches a strategy for further comparative studies.

The Baltic Countries Revisited is the latest in a series of publications deriving from the NORBALT project. This series consists of country reports from each of the countries involved in the study, as well as reports comparing the findings from the surveyed areas. 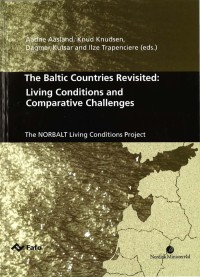