Estonia in the Grip of Change
The NORBALT Living Conditions Project
Jens B. Grøgaard (ed.)

Estonia is in the middle of a comprehensive and far-reaching process of change. The country has left Communism and is facing Capitalism, but there probably are no blueprints for reform. Democracy is being built in a tough environment, marked by social and economic uncertainty. «Estonia in the Grip of Change» takes stock of the transition so far, and examines the strains and possibilities of life in great detail. In so doing, it also throws light on some of the issues that are bound to determine the future course of political developments. How do Estonian residents view and respond to the changes that have taken place in their living conditions?

A complicated pattern is revealed: Substantial progress has been made since the dissolution of the Soviet Union. On the other hand, the level of material satisfaction of Estonians has dropped dramatically. The report documents major differences in living conditions in Estonian society today, which do not, however, on the whole, run along ethnic lines. But it may be noted that Russian-speaking residents are conspicuously absent from the new upwardly-mobile economic elite of well-educated young Estonian men. Finally, significant parts of the population protect itself, standing aloof of the sphere of money, at least partly surviving on barter.

Edited by Jens B. Grøgaard, «Estonia in the Grip of Change» has been written by a team of Estonian and Norwegian scholars. The report forms part of the NORBALT Living Conditions Project, comprising five different surveys along the Eastern Baltic Rim. Parallel reports are published for Latvia, Lithuania, and Russia (St. Petersburg and the Kaliningrad enclave). 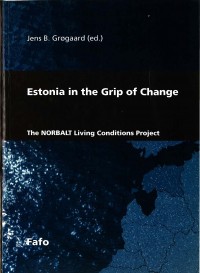