The Learning Conditions Monitor is an annual survey of the conditions for learning and skills development among adults, with particular emphasis on working life. The Monitor is carried out as a supplement to the Labour Force Surveys. An exception was made in 2007 when a shorter version of the Monitor was conducted in the Norwegian part of the Adult Education Survey run under the auspices of Eurostat. The Monitor has been based on a large representative sample of people of working age.

This is the sixth year that the Learning Conditions Monitor has been carried out. It provides the opportunity to study the development of the main indicators for lifelong learning in the period 2003–2008 for the population and employed people as a whole, as well as for different labour market groups. The data from 2008 have also been used to study the relationship between the participation of different groups in lifelong learning.

Fafo has been responsible for the design of the Monitor and for the analyses that are presented in the report. Data were collected by Statistics Norway. We would like to thank the Ministry of Education and Research for providing financial support for the work involved. 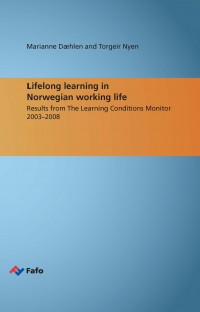