The topic of this report is recruitment practice in enterprises that are included in the public service diversity network. The organisation of the report is based on two main questions:

What is the recruitment practice among the enterprises in the public service diversity network?

Can good practices be identified that are transferable to other aspects of working life?

The data material is arranged in three parts. First, we will establish a quantitative data set that provides a picture of established hiring practice in the six enterprises in the diversity network. The quantitative part of the material is based on expanded lists of applicants and the texts of job advertisements/analyses of positions and requirements, as well as the outcome of individual hiring processes and the composition of hiring committees. The material is coded to enable mapping and analysis. The material consists of a total of 58 recruitment processes and 1341 job applicants, of whom 342 had a visible minority background. Second, we analyse protocols for shortlisting from previous hiring processes in the period 2013–2015. For each recruitment the enterprises prepare a document that provides an account of the ranking and assessment of candidates called for interview. The focus here is the criteria on which employers base their ranking of applicants. The third part of the report takes the form of an observational study, for which we have followed five selected hiring processes as they unfold. While part 1 and 2 are based on processes that have been completed, part 3 will give us the opportunity to examine the assessments made of applicants’ competence and personal fit at different stages of the hiring process. In addition to observation during job interviews, we have conducted interviews with key persons in the five enterprises, focusing on specific recruitment processes. The interviews provide information on employers’ reflections on their own practice. The empirical analyses are descriptive and explanatory. In the descriptions, our emphasis is on highlighting the totality and breadth of the recruitments undertaken in the enterprises in the public service diversity network. The explanatory part, on the other hand, focuses on the case studies that we have undertaken of recruitment processes in six enterprises. We find little to indicate any crucial differences between recruitment practice among the enterprises in the public service diversity network and in other parts of the employment market. An important explanation for this non-finding may be that employers in Norway tend to have non-discriminatory attitudes. Equality and equal rights, irrespective of gender, ethnicity and class etc., are well established and are almost taken for granted by most citizens, and thereby also by employers in both the public and private sectors. Much of the report concentrates on explaining why diversity is not given a more prominent and clearer position on the agenda in the enterprises we have studied. From the descriptive part of the study, when comparing applicants with majority and minority names, we see a difference of almost 20 percentage points in terms of the probability of being called to interview if a candidate is 40 years of age and has relevant education and experience. These differences can be extended to the candidates that have the highest probability of being offered a job. The analyses show that a majority applicant of 40 years with relevant background and experience has a 17 per cent chance, compared to a seven per cent chance if the applicant has visible ethnic minority background. In order to understand why in practice there is not more diversity in enterprises where we should assume this to be a strength, we distinguished between mechanisms associated with assessment, regulation and legitimisation. Assessment mechanisms indicate the type of information employers build upon when selecting and ranking applicants. Regulation mechanisms concern the types of factors that exist to ensure that the ranking is undertaken based on a predefined set of criteria, while legitimisation mechanisms indicate the many justifications made on the part of employers to justify their hiring decisions.

One way of reducing the risk of recruitment errors is to select candidates who accept the status quo and give the impression of being good ‘performers’, as one employer described an applicant. However, diversity means that the enterprise is willing to select candidates who diverge somewhat from the existing workforce. Emphasis on the need for candidates to ‘fit into the current environment’ may lead to a reproduction of similarity in terms of what it means to be a good candidate. Insight into the importance of the employers’ use of gut feeling was important to enable an understanding of how they approached the relative weight given to different types of qualifications. While many of them expressed their belief in the importance of a standardized interview guide (although the plan was seldom followed), there was less agreement on a predefined plan for how the relationship between different types of qualifications should be emphasised. Irrespective of the accuracy of tools that are used in the recruitment process, this is of little use if the qualities to be identified in applicants and the qualifications required for a particular position are unclear. A key finding of this study is that the criteria applicants must fulfil to be qualified for a position are not fixed, but change through the hiring process.

In none of the processes that we followed was the public service diversity network mentioned. The duty with regard to activity and reporting also remained without comment. These were expectations that were not realised or made relevant in the assessments that formed part of the discussion of the specific candidates. Based on our interviews, it is questionable whether the many actors that participate in a recruitment process contribute to strengthening responsibility and safeguarding the diversity perspective. In essence it is of course very valuable for various actors with different interests and positions (such as trade unions, HR, management, employee representatives and possibly external recruitment agencies) to challenge and complement each other. However, when their work is insufficiently coordinated, there is always a risk that responsibility is diluted.

Work experience was a key element in the assessment and ranking of ­applicants. Nevertheless, the hiring committees had different interpretations of what different types of work experience indicated about the applicants – also within the individual hiring process. In some cases, long experience could be beneficial, in others it was used to substantiate the argument that a candidate was past his/her prime, and that it would be better to look for a person with less experience because that person probably had greater potential. Another type of legitimisation is associated with selective use of test results. The tests are seen as relevant only to the extent to which they substantiate perceptions arrived at through applications and face-to-face meetings. In cases where the test results were not consistent with the impression gained of the candidate in the room by the hiring committee, doubt was cast on the validity of the tests. It should also be highlighted here that while the state itself is large, individual departments are small. In a specific recruitment process, the small department recruiting the candidate is the relevant unit, not the state as a whole. To find candidates well suited to fit in to a specific department is of highest priority. More so than to ensure diversity on a larger scale. 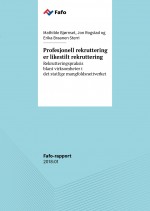