Living conditions after the Sichuan earthquake

A major earthquake measuring 8.0 on the Richter scale hit Wenchuan County of Sichuan province on 12 May 2008. Its strength and its catastrophic impact made it among the strongest earthquakes recorded in the history of China as well as in the world.  In order to inform the planning of post-earthquake restoration and reconstruction, Fafo and its partner institution Chinese Academy of Science and Technology for Development (CASTED) were entrusted to conduct a rapid needs assessment of the affected population immediately after the earthquake, and to do three follow-up studies of living conditions in disaster areas in 2009, 2011 and 2017.

Fafo’s post-disaster surveys provide a tool not only for assessing emergency aid needs, but also to map out longer-term policy needs and policy preferences among populations affected by disaster. The projects include four large-scale surveys, which cover 26 seriously affected counties in Sichuan province. The first survey was a Rapid Needs Assessment conducted only two months after the disaster, in July 2008. The three follow-up surveys measured the recovery and development of production and living conditions in earthquake-affected areas in the medium to long term. The data can be generalized to an earthquake affected population of about 13 million.

The results of the Sichuan surveys were used directly by China’s central government in its planning of the reconstruction work. The project also offers unique opportunities to follow the development in the area, and to evaluate the consequences of the disaster and the results of reconstruction for various social groups.

The projects were commissioned by China’s Ministry of Science and Technology and the Planning Group of Post-Wenchuan Earthquake Restoration and Reconstruction, and funded by the Norwegian Ministry of Foreign Affairs and the Norwegian Embassy in Beijing. 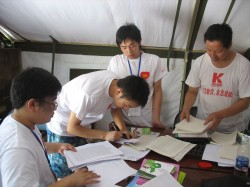