Forskere på Fafo: Arne Backer Grønningsæter South African multinational companies play in important role in the economies of the Southern African region, and what they are doing about the issue of HIV/AIDS both at home and in other countries is important for the implementation of the SADC Code on HIV/AIDS and Employment. This study compares the South African and Botswana national policy frameworks on HIV/AIDS in general, and specifically in the field of employment, and looks at how they were developed. It then presents the results of a study of HIV/AIDS initiatives amongst 33 South African multinationals, 33 Botswana subsidiaries of such companies, and 34 Botswana national companies. The findings give a measure of the current state of private sector interventions in the two countries, and compares those of the South African multinationals with the Botswana subsidiaries and the Botswana domestic companies. The report highlights shortcomings in the approaches of all three groups, but also shows that South African initiatives by multinationals are not crossing the border into Botswana, so that their subsidiaries, and especially domestic Botswana companies are being left behind in the fight against HIV/AIDS, to the detriment of Botswana employees and their families and communities. 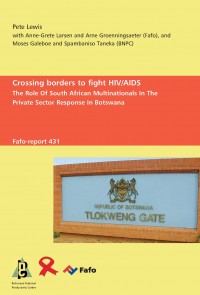